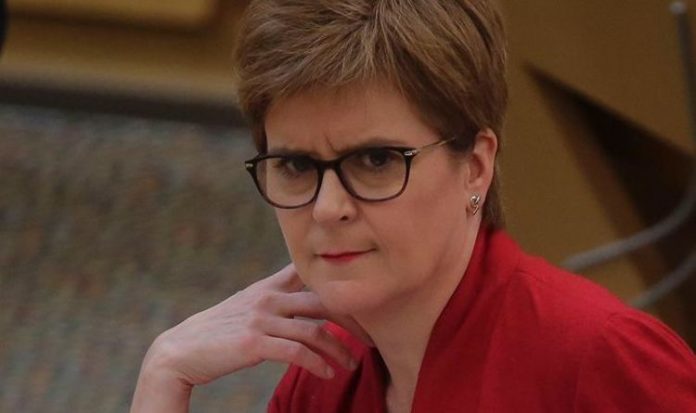 Announcing her programme for government to MSPs in the Scottish Parliament, Nicola Sturgeon said a draft Bill will set out the proposed question people will be asked in a new poll. She said at next year’s Holyrood election she will “make the case for Scotland to become an independent country and seek a clear endorsement of Scotland’s right to choose our own future”. But Scottish Liberal Democrat MP Christine Jardine has lashed out at the First Minister’s “bitter constitutional wrangling”.

Speaking to LBC, Ms Jardine said: “Those of us who don’t want independence, we are not inclined to spend yet more time arguing about the constitution when Scotland’s education, health, social care system are all struggling.

“That is what the people of Scotland deserve, that given attention.

“The irony of the SNP is they argued to stay in the European Union on the basis that the rest of us want to stay in the United Kingdom, so they can’t have it both ways.

“That is the question they can’t answer.”

Ms Sturgeon said the draft Bill will be published before next May’s Holyrood elections.

The announcement came as part of her programme for government statement, much of which was dominated by the response to the coronavirus pandemic.

She promised the “immediate establishment of a comprehensive independent review of adult social care”, adding that this would “set out options for the creation of a national care service”.

The First Minister announced the creation of a £100million Green Jobs Fund, and confirmed a Youth Guarantee scheme, which will see £60million of Scottish Government cash help provide all those aged 16 to 24 with either a job or a place in education or training.

Also on jobs, a National Transition Training Fund will support up to 10,000 people at risk of redundancy or unemployment, she said.

To help the environment, as well as encouraging people towards healthier lifestyles, Ms Sturgeon promised £500million of investment over the next five years to support active travel, such as walking and cycling.

She went on to pledge a “new 20-year vision for good quality, zero carbon housing with access to community services, transport links and green space” adding that the Scottish Government would invest £275million in community-led regeneration and revitalising town centres.

Meanwhile, to tackle Scotland’s “digital divide”, she vowed by the end of 2021 the Connecting Scotland scheme set up to provide laptops and tablets to poorer Scots would be expanded, so that up to 50,000 people can benefit from new electronic devices, training in how to use them and unlimited data.

The First Minister said, while it “would be easy to focus on nothing but COVID” when laying out her government’s plans, she also asked Scots to “seize this moment to imagine and start to build a better future”.