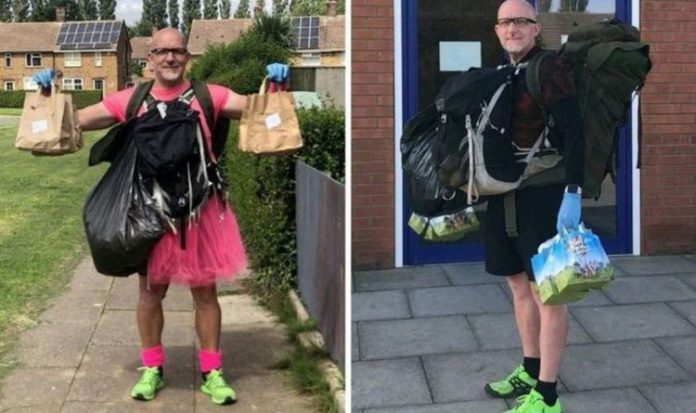 A hero teacher who sent out 7,500 packed lunches to students during lockdown has completed another incredible challenge – and spoken of the ‘overwhelming’ public support for his efforts.

We’ve partnered with KFC to explore all the amazing ways people and communities are trying to get back to normal.

Zane Powles, 48, made headlines after preparing 85 lunches EVERY morning after fearing his students would struggle to access food after school’s were shut during the pandemic.

The determined teacher walked 7.5-miles a day for 17 weeks – and totalled over 600 miles over the course of his runs in Grimsby, Lincs.

But as if that wasn’t enough, he has just completed a gruelling 1500-mile charity cycle ride through all of the UK’s city castles to raise money for children in need.

His stops included Edinburgh Castle, Belfast Castle, Dublin Castle, Cardiff Castle , the Tower of London and then finally back to Ross Castle in Cleethorpes.

Zane set out to raise £5,000 for Meals and More, who provide support to children who live with poverty and social isolation and have limited access to adequate food provision.

But he was shocked to find public donations had almost DOUBLED his target to £9,388.38.

Dad-of-three Zane said: “I am overwhelmed by the amount of support I received in words, donations and those little emoji things. It’s because of that support I made it. Your support kept pushing me to keep going.

“It was without doubt the toughest I have done so far and it challenges me in so many ways. I keep getting flash backs to days, events and places I visited-physically, mentally and emotionally. All of which, at the time, made me stop and think ‘Can I carry on?’ The answer was always ‘yes’. The cause was far greater than the pain at the time.”

Zane is now looking forward to getting back to his day job and safely welcoming students back into classrooms at Western primary school in Grimsby, Lincs.

With Zane’s life getting back to normal, there’s another change being made to help us feel ourselves again, and that’s KFC.

Some of you might have missed the delicious 11 herbs and spices during lockdown but the good news is KFC restaurants are all open and welcoming diners to enjoy succulent crispy coated chicken once more, in store and on delivery.

But remember that thing they’ve been saying for 64 years? Ignore it, as with the world drastically changing of late, we’ve all got to embrace a change. Its still KFC but It’s ****** ******* Good for the foreseeable.

Across all of his lockdown food deliveries, Zane estimates he carried roughly four tonnes of food – but said it was all “well worth it” after seeing the smiles on his pupils’ faces.

Zane – who didn’t take a single day off during the pandemic – added: “When I started these walks I was concerned about the kids and their wellbeing and I wanted to make sure I could see them all.

“But after all these months it was a bit emotional for it to come to an end – I love seeing my students and checking up on them. It’s so important to me.

“I’m just doing my job at the end of the day. My role is to help nurture and educate children, and to take care of them.

“It’s just being done in a way I never expected when I started this career.”

Because of his work, Zane won the Inspirational Primary School Teacher award in 2019 after he was nominated by a parent.

Speaking at the award ceremony, he said: “We should never give up on children – having a tough upbringing is never their fault.”