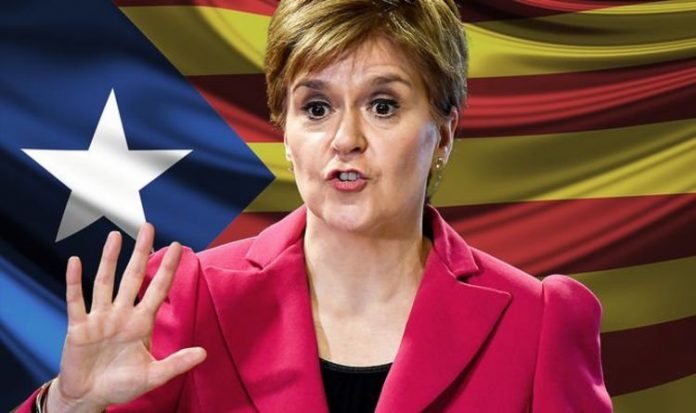 Holyrood’s May elections are fast approaching, with First Minister Nicola Sturgeon having said she plans to use the ballot as a springboard for Scottish independence. Her Scottish National Party (SNP) is tipped to make a clean sweep north of the border. It comes as popularity for independence has soared during the pandemic, as Ms Sturgeon has transformed Scotland from a “nation in the UK” to a “state on the world stage”, according to Robert Johns, Professor in Politics at Essex University and investigator on the Scottish Election Study.

However, Prime Minister Boris Johnson has repeatedly refused to entertain the idea of a second Scottish independence referendum.

Taking to the BBC’s Andrew Marr Show earlier this year, he said not enough time had elapsed since the 2014 ballot.

Instead, he suggested that a gap similar to that between two Brexit votes would be something for Scotland to aim for, meaning the country shouldn’t expect a referendum until 2055.

Ms Sturgeon, meanwhile, has said that she will “hold a legal” referendum should the SNP win a majority in May.

Nicola Sturgeon: The First Minister could be issued with a dilemma by members of her SNP (Image: GETTY)

SNP: Sturgeon has said she will hold a ‘legal referendum’ should the SNP win a majority in May (Image: GETTY)

He said it will mark “decision time” for Ms Sturgeon and the moment her hand is forced into supporting one of two groups within the party.

He explained: “There’s going to be differing views on what to do, although there isn’t much sign of that at the moment.

“There are some people in the party who favour going ahead and having the legislation, in effect a Catalonia-style referendum, defying Westminster attempts to block it.

“Whereas there are others who favour spending a few more years and stirring up more sentiment for independence if Westminster rejects it.”

Catalan: The 2017 independence was deemed illegal by the Spanish government (Image: GETTY)

On whether the decision taken by Ms Sturgeon could create a vacuum for an internal rift to emerge, Prof Johns said: “There will be lots of questions, and whether or by whom Sturgeon is challenged depends on if she goes gung-ho or whether she opts for caution

Ms Sturgeon’s previous rhetoric surrounding the dilemma of a Westminster rejection could shed light on how she might go about a referendum post-May.

In 2019, speaking at the party’s annual conference in Aberdeen, she said the SNP had a “cast-iron mandate” to hold a new referendum, but said a new poll must comply with the law.

SNP latest: The party hopes to replicate its 2015 landslide victory north of the border (Image: GETTY)

It came after senior SNP figures urged her to consider a “Plan B” option if Mr Johnson refused to grant the legal powers to pass the required legislation.

Ms Sturgeon at the time told supports that an independence vote must have the “recognition of the international community”.

Others have pointed to the idea that a Catalonia-style bid might alienate law-abiding SNP voters.

Paul Goodman, a Conservative MP for Wycombe, earlier this year said the First Minister would be too scared of holding such a vote for fear it would tarnish her image in Scotland.

Writing in The Times, he said: “So if the SNP wins its majority and Mr Johnson resists another referendum, what will Ms Sturgeon do – and Alex Salmond say – then?

“She will be wary of seeking to hold a vote unilaterally, for fear that its illegality would alienate the kind of anti-Johnson but a law-abiding Scottish voter without whose support independence can’t be achieved.”

Yet Robert Tombs, the renowned British historian, told Express.co.uk that this would throw the SNP’s already slim chance of rejoining the EU out the window.

Coronavirus: Popularity for independence has soared during the coronavirus pandemic (Image: GETTY)

This is because it would set a precedent for the Catalans – who want to be an independent member of the EU – to trigger another illegal vote, much to the dismay of Spain.

As things stand, if a referendum were held in Scotland tomorrow, the electorate would vote to leave the UK, according to the majority of polls.

Steven Fielding, Professor of Political History at the University of Nottingham, told Express.co.uk: “It might be too late” for Mr Johnson to save the union.

Last month, he set out a “five-step” plan which will portray Westminster as more multicultural than “France or Germany”, with the Union sold as “forward-thinking on green issues and technology”, aimed at the overwhelming Remain voter base of Scotland.