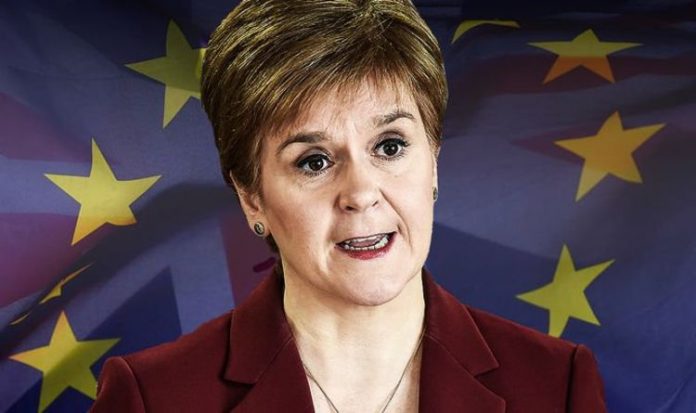 The Scottish First Minister has asked the EU for support in her pursuit of secession. Since the UK voted to leave the EU in 2016, the SNP has pushed for another independence vote, hoping to take Scotland out of the UK and back into the bloc. Nicola Sturgeon said in October: “The Scottish Government believes that the best future for our country is an independent nation within the EU. “It is precisely because we have a UK Government that is determined to turn its back on cooperation, consensus and solidarity that Scotland needs an alternative way forward.

“Unlike the EU, which is a partnership of equals where decisions require consent and often unanimity from members, the UK does not work like that and the wishes of Scotland can be ignored and overruled by Westminster.”

Scotland’s ability to join the bloc has been the subject of tense debate in recent years.

One expert warned that Ms Sturgeon must not be too vocal in opposing the euro if Scotland wants the best chance to join the EU.

Tobias Locke, professor of law at the National University of Ireland Maynooth, said there is “little doubt that an independent Scotland would qualify to apply for EU membership”.

He added it would “not be possible for it to avoid having to commit to the adoption of the euro”.

Prof Locke said if Scottish politicians were “too vocal about their non-commitment to taking such a step, there is a danger that the EU might in the end not agree to Scottish membership”.

Asked last year if Scotland would adopt the euro, Ms Sturgeon said: “No, I don’t think it would.”

She added: “No we wouldn’t and there are examples in the European Union today that prove that’s not the case. Sweden, for example, joined the EU after the so-called requirements to join the Euro were in place.”

Prof Locke is a co-author of a report which underlines how Scotland could join the EU.

READ MORE: SNP ‘could win EVERY seat’ in Scottish elections

She said: “Any barriers for Scotland in joining the EU are political rather than legal, because any candidate to join the EU has to abide by the terms set.