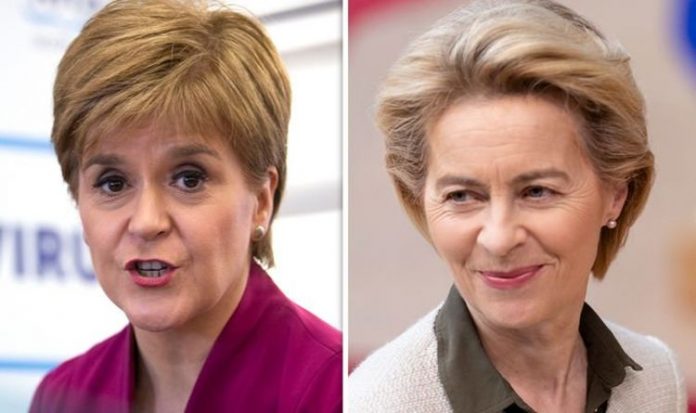 Scottish First Minister Ms Sturgeon has said she will hold an advisory referendum on independence if her Scottish National party (SNP) wins a majority in May’s Holyrood elections, regardless of what Prime Minister Boris Johnson thinks about it. Her party has set out an 11-point roadmap for taking forward another vote, which was presented to members of the SNP’s National Assembly last month. So far, since the start of 2020, opinion polls have given “Yes” campaigners a consistent lead over their unionist rivals.

Should a second referendum happen, the separatists will detail the loss of the fiscal transfer presently worth at least £10billion, the severing of Scotland from a UK single market worth almost 30 percent of its GDP, and above all, the financial chaos set to be unleashed by the SNP’s currency plan.

Even among separatists support for retaining sterling is high.

A recent poll found that, post-independence, 54 percent of respondents support using the UK’s currency permanently, with only five percent in favour of establishing a brand new Scottish currency.

Unfortunately for the nationalists, the Scottish electorate’s most unpopular currency option is also the most likely and the one the SNP are currently campaigning for.

In an exclusive interview with Express.co.uk, though, constitutional historian Vernon Bogdanor claimed that if Scotland wants to join the EU, it will be forced to join the euro as well.

Professor Bogdanor said: “Scotland could not be denied entry into the EU because if it goes independent, it will become a liberal democracy.

“Scotland joining the euro would cause lots of problems because their current budget deficit is around seven percent.

Prof Jaworski noted: “So if we have a referendum, Scottish people might vote for going out.