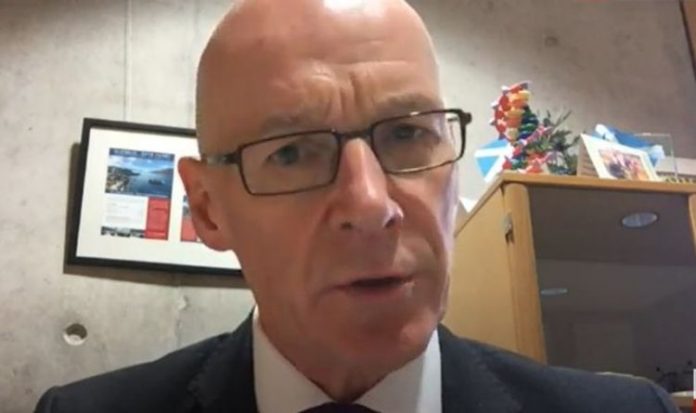 Students in Scotland will be required to wear face coverings in corridors and communal areas from August 31. The decision has sparked questions over its effectiveness as some scientists doubt the practicality of the measure. Nicola Sturgeon’s Deputy First Minister and SNP Education Secretary, John Swinney, was confronted by these concerns on Sky News.

Pointing out flaws in the plan, Mark Austin told him: “You’re going to have a range of students in terms of compliance.

READ  Changes to the training you need for an SIA licence

“You’re going to have some who obey the letter of the law in corridors and communal spaces. You’ll have others who will effectively take the mickey and risk exposing other people.

“How are you going to enforce this wearing of face masks and coverings?”

The SNP has already made it clear they will not encourage expelling students over refusal to comply with the policy.

Mr Swinney said: “This has got to become part of the culture in our schools.

“Just as much as a society we’re becoming culturally more accustomed to wearing face coverings when we are out in different situations.

“Schools will take forward an approach to enforcement which will be within the spirit of that individual school.

“That’s how we operate Scottish education, we empower our schools to create the ethos and values of bringing young people together with staff.”

READ  Supporting countries on the frontline of climate change

The Deputy First Minister added: “On the basis of that cooperative approach, I’m very confident that schools will be able to take this forward.

“Indeed secondary headteachers I spoke to last week were pressing me to make a change of this type.”

Following Scotland’s decision, the Welsh Government announced a review into whether children should wear face coverings in schools.