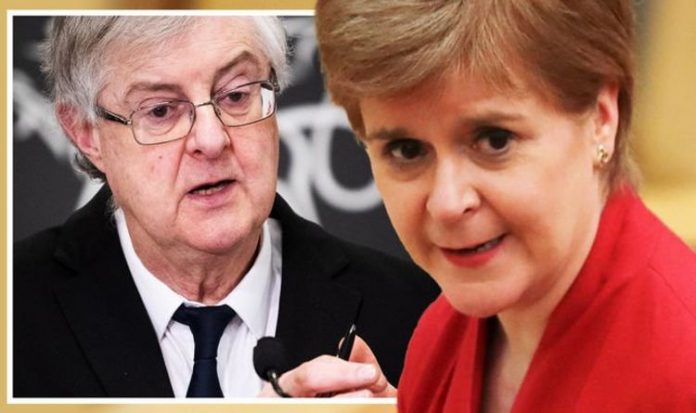 A successful Scottish independence ballot would leave a shaky UK, with England ready to incorporate Wales rather than fund two separate nations, Express.co.uk was told. It comes as calls for Welsh independence grow, with the launch of the ‘Labour for IndyWales’ group marking the first openly pro-independence group in Welsh Labour. Popularity for a UK breakaway has gained traction during the pandemic in Wales, similar to that seen in Scotland under First Minister Nicola Sturgeon.

According to a poll carried out by ITV Wales in January, around 33 percent of people would vote to leave the Union if a referendum were held tomorrow.

This was up eight percentage points on a similar poll in June 2020, which was itself a record.

And while support for an IndyWales is growing, figures like Sïon Jobbins, chair of the independence campaign group YesCymru, believe Wales’ fate is a race against the clock as Scotland looks almost certain to gain independence in the near future.

He said the idea that Wales would have any sovereignty “when” Scotland votes for independence “is for the birds”.

Wales independence: Popularity for a UK breakaway has soared during the pandemic (Image: GETTY)

Mr Jobbins told Express.co.uk: “It looks like Sturgeon will win the Scottish Parliament with a majority in May, and so there will be a referendum in Scotland – it would be difficult for the SNP not to hold one.

“The question for people in Wales, then, is that we have a choice: Independence or incorporation into England.

“We’ve already heard noises from the Conservatives about getting rid of the Assembly, and we’ve seen the Tories use the Internal Market Bill specifically to take powers away from the Senedd and to override Senedd decisions.

“So the writing’s on the wall.

“If Scotland votes for independence, which I think it will, the idea that there would be a Welsh Parliament within the so-called UK of England and Wales is for the birds.

“You’ve got to be criminally naive to think that that would last for another five years of Tory rule.”

Mr Jobbins added that he believed this was all the more prevalent as, “sooner rather than later, Ireland will also unite – so where will it leave Wales?”

The idea that Wales would be at the mercy of Westminster if Scotland leaves the UK is not a new one.

Former First Minister Carwyn Jones said in 2019 that Wales could become independent “by default” according to what the other two nations – Scotland and Northern Ireland – do.

His words echoed the concerns of Mr Jobbins, as he told DW News: “If Scotland goes and Northern Ireland decides to join a united Ireland, England and Wales alone would not work and maybe the English would leave us.”

King Edward I: Edward I conquered the western principality of Wales in the late 13th century (Image: GETTY)

Wales’ ties to England go back hundreds of years.

In the late 13th century, King Edward I conquered the western principality of Wales, claiming it as a territory of England.

He next took aim at Scotland, inviting the First War of Scottish Independence – of which Scotland emerged with its sovereignty undamaged.

The title “Prince of Wales” emerged during this period, as English monarchs gave it to their successors in order to signify their control over the territory.

Wales was not, however, an official part of the Kingdom of England until the 1530s and 40s when, under King Henry VIII, England passed the Acts of Union, extending English laws and norms to Wales.

This was the first major political union in what would become the UK, and has lasted since.

Although, as Mr Jobbins appears to believe, it could come crashing down “within the decade”.

Moves have been made to blunt the nationalistic fervour.

While Prime Minister Boris Johnson is focused on preventing Scottish independence, Labour’s leader Sir Keir Starmer has focused on the UK as a whole, promising to spread Union-wide devolution.

Yet, as Steven Fielding, Professor of Political History at the University of Nottingham, told Express.co.uk: “His plans are about Scotland, not Wales, and I don’t think Wales right now wants any more devolution.

“And there’s no serious call for independence in Wales at the moment.”

His comment is fiercely contested by the likes of Bob Lloyd, President of Labour for IndyWales.

He thinks Wales is hungry for a socialist state having voted Labour in every domestic election for the last 100 years.

However, Mr Lloyd said as things stand, this will only be possibly with independence.

He told Express.co.uk: “Wales has always wanted socialism, and so I think independence is important to the movement, to the cause of socialism – it’s a tool to create a socialist state.”