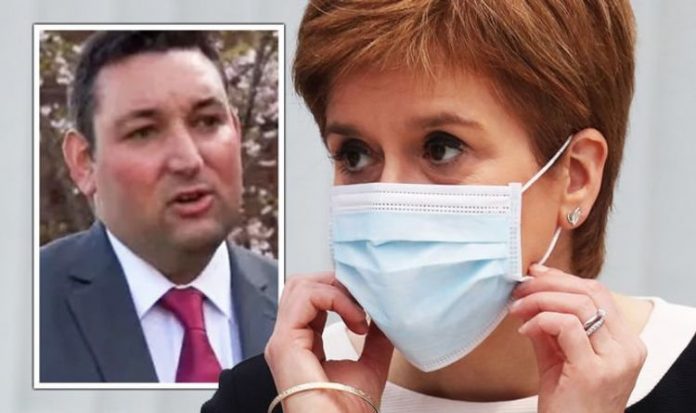 Eighty-two percent of people think Nicola Sturgeon has handled the coronavirus crisis well in comparison with Boris Johnson’s 30 percent, according to a recent Panelbase poll. The First Minister may have achieved a “PR success” from the pandemic, but she has some serious questions to answer, according to Scottish Tory Miles Briggs. The MSP spoke to Express.co.uk about the three major areas where the SNP leader made mistakes in Scotland.

Mr Briggs said: “I think in terms of my concerns, the testing regime in Scotland has been something I’ve been talking about constantly from the start.

“For example, in Scotland we’ve only actually used a third of the capacity.

“We know what the World Health Organisation has said around the suppression of the virus, to test as many people as possible.

“There have been specific issues with people working in frontline services not getting tested, and just us not utilising testing capacity.”

He continued: “PPE also specifically had some real concerns, especially at the beginning of this crisis, over stocks and the problems around distribution.

“Nicola Sturgeon admitted to this at the very beginning herself, that we needed to streamline and simplify distribution lines in Scotland for PPE.

“For people who work on the frontline of the health service, who I’ve had a lot of complaints from, they have not been happy over the quality and access to PPE as well.

“Above all, one of the areas where the Scottish Government will really seriously have to answer questions on in the future, is the care home crisis.”

“We’ve not really had a chance to properly, fundamentally look at the mistakes. Nicola Sturgeon says there will be time.

“People will have to be held to account within this period in the Scottish Government.

“Nicola Sturgeon’s PR success in this is one thing, but the failures we’ve seen over the months of this crisis can’t just be forgotten and swept away.”

On Sunday, the Scottish Government confirmed that 394,455 people had been tested for coronavirus since the start of the pandemic.

They added that a further 48 people had tested positive, taking the total amount of cases to 18,998.

The number of deaths from patients who tested positive stands at 2,491.

Express.co.uk has contacted the SNP to reply to the claims.