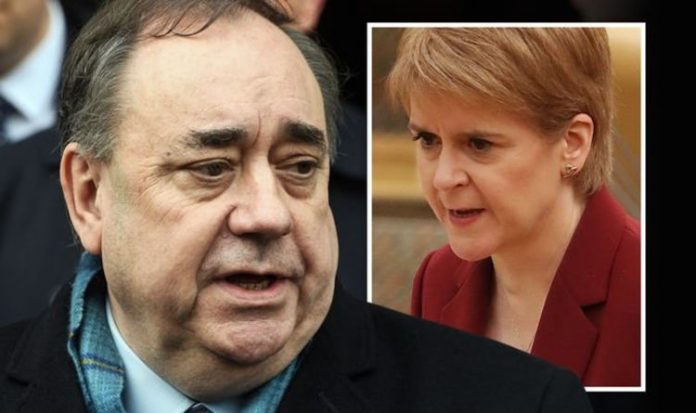 Ms Sturgeon once enjoyed a good relationship with the veteran politician – Scotland’s former First Minister – having worked alongside him as deputy leader from 2007 to 2014. She took over as leader of the Scottish National Party (SNP) and Scotland following his failed independence referendum in 2014. The pair appeared to remain amicable until 2018, when Mr Salmond was accused of sexual assault – allegations he was cleared of last year – following Ms Sturgeon’s request for new government policies on sexual harassment.

While the controversy has played out in the public arena, support for Ms Sturgeon and the SNP has, in fact, grown.

This has largely been credited to her handling of the coronavirus pandemic, and ability to carve out an image of Scotland as a “state” rather than simply a part of the Union, according Robert Johns, Professor in Politics at Essex University who is an investigator on the Scottish Election Study.

However, he said that although the crisis is unlikely to harm Ms Sturgeon’s image among Scotland’s electorate immediately, it could have consequences on the party as a whole in the future.

Professor Johns said: “There’s a limit to what the crisis can do to the SNP’s support in the election in May.

“But that’s not to say it’s not doing damage to the party.

“It may be that people will be less impressed by the SNP as a political party.”

He claimed some Scots are in the same position Brexit voters found themselves in during the 2019 general election – those people who might not have liked Prime Minister Boris Johnson as a figure, but wanted the UK to leave the EU.

Prof Johns said: “It’s likely going to be the same for the SNP – they’ll win in May because lots of people support independence, and they’re the main agent of independence, despite whatever else is going on.”

Currently, according to the majority of polls, if a referendum were held tomorrow, Scotland would vote to leave the Union.

It is believed that just over half favour this outcome.

Yet many have noted that the figure is small when considering the fully-fledged independence campaign that has been under way for years.

JUST IN: Alex Salmond to accuse Sturgeon government of ‘pantomime of deception’

A string of high-profile members have been sacked in recent weeks, including the party’s top Westminster representatives Joanna Cherry and Neale Hanvey.

Writing in the New Statesman, Ms Cherry, who has been described as an ally of Mr Salmond, suggested her dismissal came as the result of the party’s bitter dispute over Ms Sturgeon’s Gender Recognition Act.

She wrote: “The reasons for my sacking were not made clear but I was not surprised.

“For some time a small but vocal cohort of my SNP colleagues has engaged in performative histrionics redolent of the Salem witch trials.

“The question – do you believe or have you ever believed that women are adult human females? – is one I must answer in the affirmative, but it’s not a response that is popular with some who have the ear of the leadership.”

Meanwhile, several Scottish Conservative MSPs have come out and demanded that the “buck stop” with the First Minister for high-level failings, and that she should “not be allowed” to pass responsibility to a series of “fall-guys” regarding the legal battle, according to The Herald.

The publication said it came as the Scottish Government’s top office, Permanent Secretary Leslie Evans, would “likely be a casualty” of Mr Salmond’s inquiry.