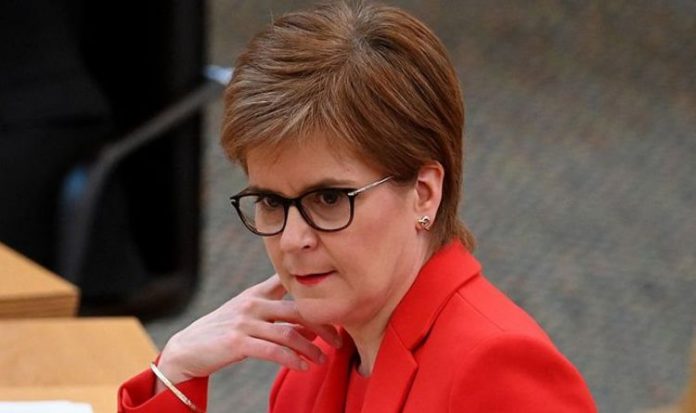 Raoul Ruparel, formerly the Prime Minister’s special advisor on Europe, made the forceful intervention as he referred to a chart. He was responding to the argument that independence would allow Scotland to diversify its trade and become less reliant on the rest of the UK.

Government figures from last year showed Scotland exported £85billion worth of goods to other parts of the UK.

This was far higher than all other countries combined, with the international figure coming to £33.8billion.

In response, Scotland Secretary Alister Jack said: “The Scottish Government’s own figures show that Scotland’s most important trading partner is the rest of the UK – worth more than three times that of trade with all 27 EU countries combined.

“This demonstrates that our Union is absolutely crucial to supporting jobs, businesses and prosperity across Scotland.”

Mr Jack also warned Scottish independence would result in “a hard border between Scotland and the rest of the UK”.

Some Scottish nationalists have argued leaving the UK would allow Scotland to diversify its trade and deal more with other parts of the world.

They point to the Republic of Ireland which used to trade predominantly with Britain but now trades more with the European Union and the United States.

Irish government figures show between 1925 and 1950 nearly all of Ireland’s trade was with the UK.

Referring to Ireland he tweeted: “The chart highlights the reduction in trade share with the UK didn’t come from switching trade away from UK but from taking advantage of opportunities elsewhere and increasing trade overall as a share of GNP [Gross National Product].

“The problem is, Scotland has already had all these opportunities when UK was inside the EU. Yet is still traded predominantly with the UK.

“So these won’t be new opportunities for Scotland as they were for Ireland when it joined the EEC.

“Furthermore taking advantage of these opportunities requires frictionless trade between Scotland and these other countries.

“But it is very unlikely Scotland will have that, as will likely have to remain in customs union with UK otherwise there would be a hugely costly land border.”

However, Boris Johnson is currently refusing arguing the matter was settled by the 2014 referendum.

Pointing to statements made before the vote by senior nationalists, who described it as a “once in a generation” event, the Prime Minister has suggested there shouldn’t be another referendum until 2054.

SNP figures have suggested the party could hold a second referendum even without the British Government’s consent if it wins the upcoming Scottish Parliament elections.