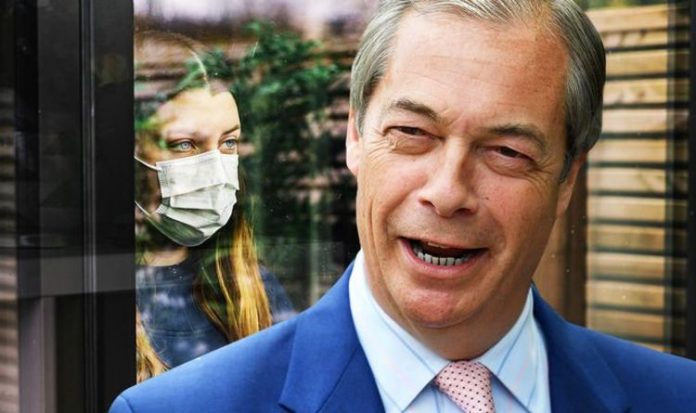 The Reform UK party said they would support the Great Barrington Declaration, which argues for a return to normal life and the scrapping of coronavirus lockdown restrictions. The party asserts that only vulnerable members of society should shield from the coronavirus. In the poll, which asked “would you vote for Reform UK?”, the vast majority of those who took part, 74 percent, voted ‘yes’.

Those who said ‘no’ they would not vote for Reform UK came in at 25 percent.

There was a marginal number of respondents who said they “don’t know”, coming in at less than one percent.

Speaking to the Daily Mail he said: “We feel there is a massive political hole at the moment.

“The crisis has shown how badly governed we are, everything from our quangos to the £12bn we have wasted on track and trace, to firms being given the most ludicrous contracts, to illegal immigration where we tough talk and nothing ever happens.

“The whole system of government in the UK is not working, and is therefore in need of very radical reform.”

One Express.co.uk reader was quick to praise Mr Farage, they commented: “Nigel Farage is, and always has been, the only hope for this country.”

“Thanks Nige, get cracking on splitting the Tory vote.”

While another reader was more critical, they said: “Nigel is getting a little low on funds at the moment, after losing the security of his last daytime employment.

“And he is probably expecting the imminent demise of his US patron.

“So how about sponsoring Nigel’s new venture??

The poll commenced at 9.30am on November 2 and finished at 9pm on the same day.