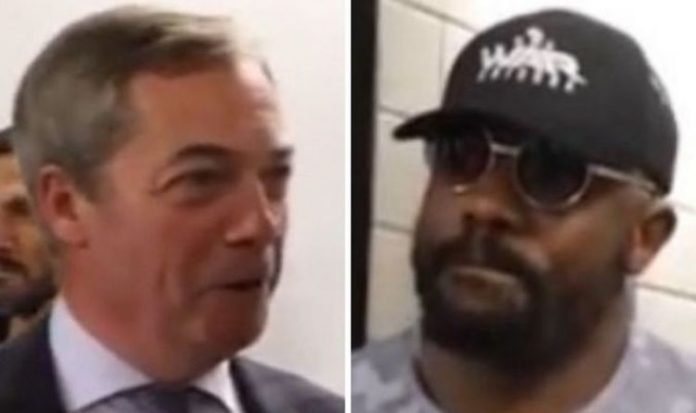 Mr Chisora is set to headline Sky Sports Box Office’s fight night on Saturday, as he takes on Ukrainian unbeaten champion Oleksandr Usyk, with the winner likely to face British heavyweight Anthony Joshua. The 36-year-old, who was born in Zimbabwe but moved to the UK 20 years ago, has often courted controversy throughout his lengthy career. Highlights of his 40-fight boxing journey have included beating Carlos Takem and Kevin Johnson, but his reputation was severely damaged after his bitter feud with former heavyweight king David Haye turned ugly.

But he has resurrected his career, and earned waves of new fans as a result – including striking up an unlikely friendship with former Ukip leader Mr Farage.

And in one bizarre encounter, Mr Chisora, who backed Mr Farage’s Brexit Party in 2019’s European elections, told the ex-LBC radio host how negotiators on the UK’s exit from the EU should be carrying out their discussions.

He was speaking moments after knocking out Liverpudlian fighter David Price, in a bruising contest in October 2019.

Unearthed footage showed Mr Chisora hugging Mr Farage before he asked him whether he’s been to a boxing match before.

Mr Chisora, who floored Mr Price in the fourth round, said: “Mate I wasn’t hanging about, I didn’t want to waste no time.

“They’re saying they’re wasting time on Brexit, but like that I just want to get it done.”

The boxer then mimicked his boxing stance, before unleashing a couple of jabs and welcoming Mr Farage into his dressing room as part of his entourage.

Chisora responded: “I think you know, the people voted and when people vote it should be done. The public voted and you know the only people who are making it so difficult is the Londoners.

“But when I travelled to the outskirts, like you know Manchester or Birmingham, places like that, the same things need to be changed.

“I just think I voted to Leave, and I think the whole country voted to leave, but we’re still holding on to the same thing, three-and-a-half years have gone which I don’t think is fair.

“Now people will not believe in voting, because if you vote what are we voting for?”