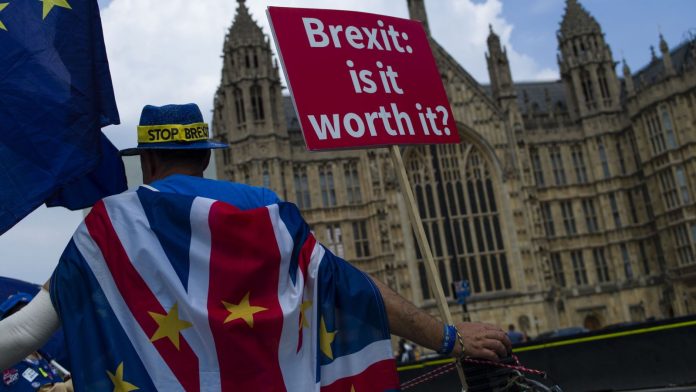 The implications of the latest slew of “no-deal” Brexit notices are wide-ranging and profound at home, work and on holiday.

The job of the cabinet this morning was to sign off the plans to make a no-deal scenario “not the end of the world”, as the PM has suggested.

But then the governor of the Bank of England Mark Carney, smuggled in and out of cabinet by the back door, gave a presentation on the effects of a no-deal Brexit on the economy.

Although cabinet sources are adamant that Mr Carney was giving scenarios rather than predictions, the “worst case” no-deal scenario he sketched out meant a recession, a renewed slide in sterling and house prices falling by about a third over three years.

What a moment in history that presentation would have been.

Britain’s foremost economic official briefing the cabinet that this brutal economic fall could be the result not of a financial crisis elsewhere, or of some other natural or manmade calamity, but a feasible result of the stated policy path of the government itself.

The Brexit process is often surreal and always unprecedented, but that is quite the moment.

My understanding is that this warning weighed heavily on those present.

Even by the Project Fear sceptics in cabinet, Mr Carney was politely listened to.

Privately, some suggested that this “worst case scenario not a prediction” was a “little high”.

But there can be little doubt it united this cabinet behind Chequers, even as it might divide further this leadership from some of their backbenchers.

And this was a meeting at which some of those backbenchers had hoped for, and anticipated, cabinet resignations.

Of course, most cabinet ministers are are well aware of the stakes, having gone through the arduous technical process of preparing the no-deal notices.

Whereas macroeconomic projections have somewhat lost the lustre, the real practical implications of radical upheavals to systems underpinning transport, energy, trade and communications built up within European Union law are difficult to dismiss as Project Fear.

It is just reality that a decision to go for no-deal is a decision to invalidate EU driving licences, only have third country access at EU nation’s passport control, make legal data roaming charges, invalidate the automatic recognition of the standards of UK assembled cars in its biggest market, strip UK companies of access to certain EU satellite information systems and so on and so on.

For many millions of voters, these inconveniences do not affect them, they do not believe them, and even if they did, would be insufficient to outweigh the freedom of departure from the EU.

But not all who voted Leave voted for these consequences.

If that wasn’t enough, Emmanuel Macron’s Europe minister Nathalie Loiseau sounded pretty uncompromising on the way in to meet the Brexit secretary when she said everyone would suffer, but the UK would suffer the most if there was no deal.

Later, going much further into the no-deal impacts predicted by France – she suggested that not only would planes be grounded but also the Eurostar could stop functioning.

This possibility was also mentioned at a no-deal cabinet meeting.

It’s not what they want, they say it’s unlikely, but it is government policy to accept no-deal and all its consequences as a possible outcome in six months time.

Business leaders say the notices show the cold reality of no-deal hitting the economy “like a sledgehammer”, but the PM is reluctant herself to make this case in this way – she needs things to be just concerning enough for her backbenchers and the public to reject no-deal but neither her handling of it nor Brexit itself.

Perhaps it might just be the moment when a public sceptical of so-called Project Fear began to acknowledge that the consequences of no-deal at least will be seen far and wide.

Meanwhile in Brussels the originally intended audience for the no-deal plans – Juncker, Barnier and Tusk – are preparing the Salzburg summit that will take place in a week.

The point of this all was to strengthen the PM’s hand in negotiations.

And yet as the talk and the preparations intensify, the chances of this outcome desired by none of the negotiators, seems to rise.