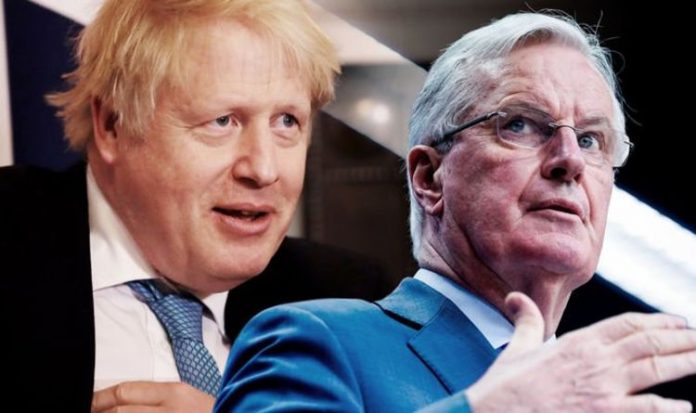 Vice-chairman of the European Research Group (ERG), David Jones insisted Brussels has breached the terms of the political declaration. The MP for Clwyd West also claimed Boris Johnson’s chances of securing a free trade agreement with the EU now stands at just 20 percent. Despite his warnings of a no deal Brexit, Mr Jones also held out hope for an agreement between the two parties before the end of the year.

Speaking on The Daily Telegraph’s, Chopper Politics podcast, he said: “The Withdrawal Agreement is an agreement between two parties and both have obligations to use best endeavours to negotiate in good faith to achieve a free trade agreement if they can.

“Furthermore the European Union, in terms of the political declaration, has got to negotiate respecting the sovereignty of the United Kingdom and the integrity of the UK internal market.

“They have not done any of that and I think it is the EU that is pretty badly in breach of the agreement and that needs to be explained to the wider international community.”

Within the revised Political Declaration, which was agreed in October, the framework states the sovereignty of the UK must be respected.

It states: “The future relationship will be based on a balance of rights and obligations, taking into account the principles of each Party.

“This balance must ensure the autonomy of the Union’s decision making and be consistent with the Union’s principles, in particular with respect to the integrity of the Single Market and the Customs Union and the indivisibility of the four freedoms.

“It must also ensure the sovereignty of the United Kingdom and the protection of its internal market, while respecting the result of the 2016 referendum including with regard to the development of its independent trade policy and the ending of free movement of people between the Union and the United Kingdom.”

This revised political declaration was agreed in tandem with the withdrawal agreement last October.

Under Clause 42 of the legislation, ministers now have the power to edit exit declarations for goods moving between Northern Ireland and Great Britain.

UK ministers, however, have stated the purpose of the legislation is to maintain unrestricted trade between the devolved nations.

EU officials have, however, insisted the withdrawal agreement must be honoured and put into force.

Such is the dire state of relations, European Commission vice president Maros Sefcovic met with Chancellor of the Duchy of Lancaster, Michael Gove to discuss the bill this week.

The EU Commission has now stated any deal now seems unlikely due to the Internal Market Bill.

The Prime Minister’s spokesman said: “We have engaged constructively with the EU throughout this process.

“We have negotiated in good faith and we will continue to do so.

“We do still believe that there is a deal to be reached. We will work hard to achieve it.”