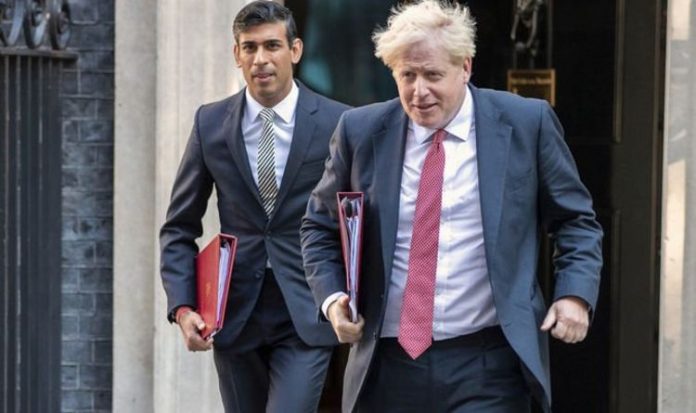 The row broke out as the Prime Minister prepares to make a major announcement tomorrow on his plans to tackle the rapid rise in coronavirus infections in the north and Midlands.

It is thought that, among other measures, restaurants and pubs will be ordered to close in the areas with highest infections.

But yesterday saw the Labour Metropolitan mayors join the fight and warn the PM that Rishi Sunak’s compensation package for people in their regions risked him breaking his “levelling-up” pledge to the north and would lead to him “levelling down”.

Under the Chancellor’s scheme, furloughed workers would receive two-thirds of their wages, rather than the 80 per cent given under the national lockdown.

Greater Manchester mayor Andy Burnham questioned closing down pubs and bars, and said he is considering legal action over the level of compensation.

He said accepting Mr Sunak’s financial package would be to “surrender” people to hardship in the run-up to Christmas.

He added: “It will level down the north of England and widen the North-South divide.”

In an open letter to No 10, published alongside the northern leaders’ press conference, they added: “We believe the Gov­­ernment should bring forward a separate vote on the financial package, to provide an opportunity to reject it and requiring the Government to return with an improved package taking account of the points we have raised.

“We would ask that you use whatever routes might be open to bring about a vote in the House.”

The letter is signed by Mr Burnham, Liverpool Metro Mayor Steve Rotheram, Sheffield’s Dan Jarvis, Jamie Driscoll, for North of Tyne, and Sir Richard Leese, leader of Manchester City Council. Mr Driscoll said: “If we take away somebody’s right to earn a living we have to fully compensate them.”

He pointed out that even people on the minimum wage would only get two-thirds of that money.

Mr Rotheram said that despite asking seven days ago for the ­scientific evidence backing up the proposals they are still waiting for a response from ministers.

A spokesman for the Gov­­ernment said that decisions will be kept under review.

READ  UK lockdown: What is the R Rate, how is it calculated and will there be another lockdown? | UK | News (Reports)

Responding to criticism of the Job Support Scheme, a Gov­­ernment spokesman said: “Through­­­out the pandemic, we have worked hard to protect jobs and support the economy, while trying to limit the spread of coronavirus.

“Ministers are continuing to work closely with local leaders on how we can combat the virus together. We will keep all financial support under review to support businesses who need it most and protect jobs over the coming weeks and months.”

A senior Government source said that “extensive” talks are taking place in the background and help has been offered to councils and the police, to ensure they can enforce regulations, as well as an offer for more localised test and trace systems to track the disease.

But criticism was not confined to senior Labour politicians last night.

Chris Oglesby, chief executive of property firm Bruntwood and board member of the Northern Powerhouse Partnership, said: “What they can’t do is keep much of the North as a permanent open prison, if it is both ineffective as well as a considerable sacrifice of many livelihoods, businesses and freedoms.”

He added: “To see the decimation of the performance and the effect on staff’s mental health.

“We are down 80 per cent on our turnover even taking into account Rishi Sunak’s latest round of proposed support. Let’s just say he hasn’t understood the problem. We have just seen two weeks of absolute slaughter.”

The open letter was directed to all MPs for the northern regions, including the Blue Collar Tories.

Writing for the Sunday Express today, founder Esther McVey points out that it was the Blue Collar MPs who had been leading the questioning of Government strategy, including in a meeting with chief medical officer Chris Whitty last week.

READ  Coronavirus news: All over-50s could be immunised by April in vaccination boost | UK | News (Reports)

They also led the fight to help bail out the “Forgotten Ltd” self-employed business owners.

But other Blue Collar MPs saw the Labour mayors’ intervention as a naked attempt to win back the red wall, just months ahead of their own elections in May.

Ashfield Conservative MP Lee Anderson said: “It’s a cynical attempt by Labour and the Left to exploit this whole situation. It is no wonder people suspect that Labour mayors and other Labour politicians are trying to take advantage of this terrible situation. It is disgusting.”

Rother Valley Tory MP Alexander Stafford said: “They are trying to cause division. Let’s be honest. This is a global disaster and national crisis, and they are too willing to score political points rather than actually engaging.

“I think it’s a disgrace. It’s a naked attempt to boost support for Labour.”

But the Government faces a warning from leading Brexiteer economist Professor Patrick Minford that its Covid strategy “definitely” risks bankrupting the economy. He said the idea of closing down the country again is “absolutely crazy”.

He added: “You can’t indefinitely support people through hand-outs.”

Seven residents have died in a coronavirus outbreak at a care home in Scotland. Operators HC-One confirmed the deaths at Redmill Care Home in East Whitburn, West Lothian.

Meanwhile, Sage scientist Calum Semple, a University of Liverpool expert in outbreak medicine, said that while wearing a mask while walking the dog won’t make any difference “if you’re in a city centre shopping precinct, or you’re queueing outside the shops then yes, you should be wearing a face mask”.