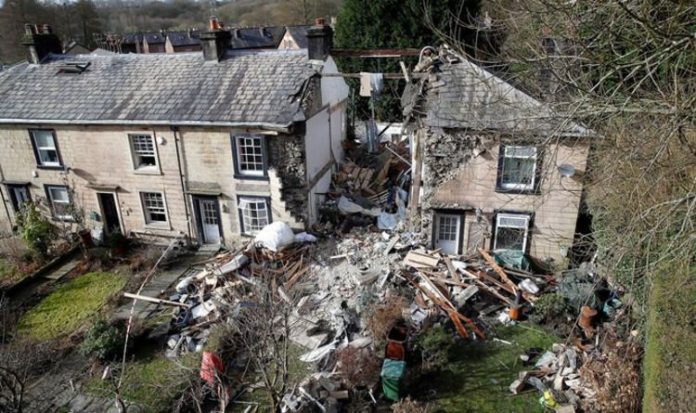 One woman and a young girl were pulled screaming from the rubble and taken to hospital. Three people were treated by paramedics at the scene. Neighbour Kerry Crompton, 36, rushed out after hearing the blast.

The specialist nurse said: “I was watching TV when I heard the explosion. I went outside, there was smoke everywhere. I heard screaming coming from next door. I saw a mum and daughter and dragged her out.

“The little girl was hysterical because she had lost all her toys.

“The mum was screaming. I think she was completely disorientated. I just grabbed them both and the dog and got them out of the house. I’ve been told that at the time of the explosion the lady who died was in the living room on a video call to her friends. It is so sad – I used to see her walking her dog.”

The explosion shook the village of Summerseat, Ramsbottom, Greater Manchester, 9.30pm on Wednesday.

Yesterday the cause was still being investigated. More than 30 neighbouring houses were evacuated and power supplies were cut off. Most residents have been allowed home.

Fire service watch manager Steve Wilcock said: “Summerseat is a close-knit community and there has been an outpouring of support.”

Greater Manchester Police said last night that the victim has not been formally identified but is believed to be Hazel Wilcox.