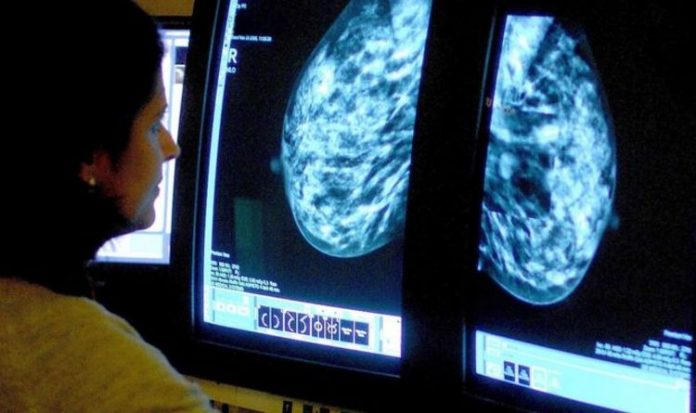 Charity Breast Cancer Now estimates the massive backlog means 8,650 women may have had undetected breast cancer. NHS England yesterday vowed to tackle the problem. It said the recovery is well under way, with more than 400,000 women invited for screenings between June and August. Screening programmes for breast, bowel and cervical cancer were officially paused in Wales, Scotland and Northern Ireland in March.

Although not officially halted in England, they were effectively paused to reduce the risk of patients being exposed to infection.

The total number of patients affected by all cancer screening programmes is thought to be as much as three million.

Breast Cancer Now’s latest report estimates that 986,000 women across the UK missed a screening over a period of four and a half months.

Baroness Delyth Morgan, the charity’s chief executive, said: “That nearly one million women across the UK were caught up in the backlog waiting for breast screening is cause for grave concern.

“We understand that the breast screening programme was paused out of necessity due to the global Covid-19 pandemic, but we must now press play to ensure that all women can access breast screening, and we cannot afford for the programme to be paused again.”

The charity is urging health officials to ensure the anticipated surge in demand for diagnostic services can be met.

It said services have resumed at different speeds across the country. But the charity warned that a reduced capacity due to infection control measures, a significant backlog, and more women starting to come forward with symptoms will place huge pressure on an already over-stretched service.

She said: “Screening diagnoses around 19,000 breast cancers a year in England and there has already been a delay of over four months.

“To not only maintain prepandemic levels of activity, but also do a huge catch-up with inadequate workforce levels is an enormous mountain to climb. Our most valuable asset is our staff – we simply have to invest in them.

“You can’t make a radiologist quickly, so a long-term investment plan is essential.”

Cancer Research UK estimates that three million Britons have had a screening appointment delayed during the pandemic.

This is based on figures showing around 210,000 people are usually screened for bowel, breast and cervical cancers each week in the UK.

Despite the worrying figures, officials have promised the backlog is being tackled and the long-term impact of delayed diagnoses is expected to be very low.

A spokesman for the NHS said: “The vast majority of cancers detected through screening programmes are at a very early stage and so any impact on patients who were due to be screened is extremely low.

“More than 200,000 people were treated for cancer during the peak of the pandemic. Breast screening services are now fully up and running, with over 400,000 women invited between June and August, and thousands more invites are now being sent every month – we would encourage anyone who is invited to book an appointment.”

Cancer specialists yesterday said they were experiencing a surge in new cases due to delays from coronavirus, with more patients in advanced stages of the disease.

Dr Rob Jones, of Glasgow’s Beatson Centre, said: “We are now seeing a surge in patients and by default some of those patients will have more advanced disease – it’s inevitable if you delay presentation.” Scientists had previously estimated that, in a worst case scenario, the pandemic could cause 35,000 additional cancer deaths within a year.

Yesterday, leaked data showed the number of people on the cancer waiting list in England.

The Health Service Journal reported that the total number grew from 50,000 at the start of August to around 58,000 in the middle of September.

The Daily Express is supporting Cancer Research UK as it fights to keep research going following a drop in funding due to the pandemic. To donate, visit cruk.org/dailyexpress

We are deeply concerned that nearly one million women across the UK have missed NHS breast screening due to Covid-19, as we know that around 8,600 of these women could have been living with undetected breast cancer.

Mammograms are a key tool in the early detection of breast cancer.

The programme prevents around 1,300 women a year dying from the disease across the UK.

While the breast screening programme is now starting up again, it is happening at different speeds across the UK.

The availability of appointments has been significantly reduced due to measures to enable social distancing and to prevent Covid-19 spreading.

Combined with this there is the significant backlog of women waiting for screening and more women starting to come forward with concerns about possible breast cancer symptoms.

This will place huge pressure on the imaging and diagnostic workforce which was already over-stretched prior to the pandemic.

Governments and NHS health bodies across the UK must now set out how this anticipated influx in demand for imaging and diagnostics will be met.

The UK Government must also seize the timely opportunity presented by the Comprehensive Spending Review, to urgently invest in recruiting and training NHS staff.

This is so the workforce is equipped to give all women with breast cancer the best possible chance of early diagnosis.

While screening comes with some risks to be aware of, Breast Cancer Now encourages all women to attend their appointments when invited.

As women wait for their appointments, it’s important that everyone continues to check their breasts regularly, and to report any new or unusual changes to their GP.

The sooner breast cancer is diagnosed the more likely treatment is to be successful.

If you need someone to talk to our nurses are at the end of the phone.