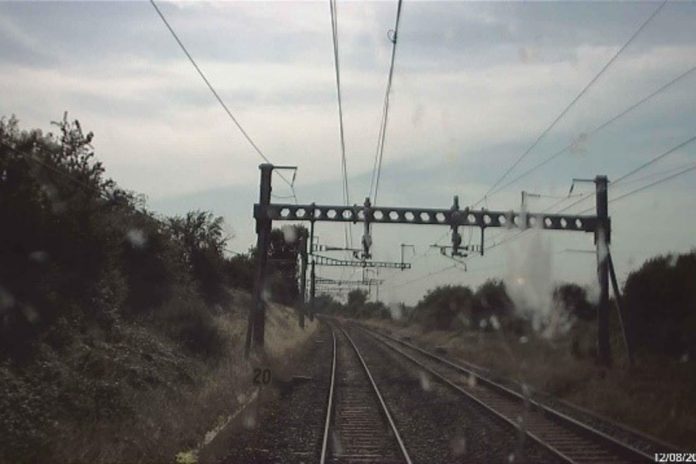 At about 16:07 hrs on Wednesday 12 August, a Great Western Railway (GWR) service from London to Bristol travelled at around 117 mph (188 km/h) over an emergency speed restriction (ESR) of 20 mph (32 km/h), near Dauntsey, Wiltshire. This incident did not result in any damage or injury.

GWR notified RAIB of this incident soon after it occurred. We have since gathered evidence from the railway industry and from witnesses, and carried out a preliminary examination of the incident.

An ESR had been in place on the down main line at Dauntsey since 27 June 2020. The line speed in the area is 125 mph (201 km/h). This restriction, for a track defect (a geometry fault known as cyclic top) over a length of about 100 metres, was to 30 mph (48 km/h) for freight trains only. The signs indicated a differential speed restriction of 30/125 mph (30 mph for freight trains and 125 mph for passenger trains).

On the day of the incident the weather was very warm, and at 13:55 hrs local track maintenance staff imposed a restriction of 20 mph (32 km/h) for all trains over the same length of line, because a critical rail temperature had been reached. In accordance with the railway Rule Book, trains were stopped and cautioned by the signaller until 15:52 hrs, when revised lineside signage was put in place.

The first train to pass over the section of line after this was the 15:12 hrs service from London Paddington to Bristol Temple Meads. The driver of this train had booked on for duty at 14:36 hrs at the GWR depot at Paddington. When he booked on he was issued with a hard copy of a notice advising him of the ESRs currently in force on the lines which he would be driving over. This included the ESR at Dauntsey, which he noted. He was aware that this ESR was in force as he had driven over it several times in the previous few days, but it did not require the passenger trains that he drove to reduce speed.

Network Rail did not inform GWR of the revised ESR at this location until 16:33 hrs. The driver had no means of knowing that the ESR at Dauntsey had been changed earlier that afternoon, and that his train would be required to reduce speed to 20 mph (32 km/h). He therefore took no action when the flashing emergency speed indicator came into view. The automatic train protection (ATP) system had not been modified to take account of the changes to the ESR, because they were not likely to be in effect for more than a few hours, so the driver received no warning from ATP that a reduction in speed would be required.

When the driver saw the ESR warning board, he did not register that 30 mph had become 20 mph. However, he did notice the absence of any 125 board below the 20. He assumed this had become displaced, and after a momentary brake application, the train continued at speed for about 37 seconds, covering over one mile (1.6 km), until the driver was able to read the 20 mph board at the point where the ESR started. At this point the train was travelling at 117 mph (188 km/h). The driver then made a full service brake application. This reduced the speed of the train to around 105 mph (169 km/h) by the time it had passed clear of the affected section of line. The driver then reported the incident by radio to the signaller, saying that he believed some of the ESR signage was missing. The boards in place were checked and found to be correct. The ESR for critical rail temperature was removed at 19:07 hrs on the same day.

We have reviewed the findings of this preliminary examination and have decided not to carry out any further investigation of the incident. RAIB has previously made recommendations in our investigation into the similar incident at Sandy on the East Coast Main Line on 19 October 2018 (RAIB report 10/2019), which cover topics which are relevant to the incident at Dauntsey. Recommendation 1 was that train operating companies should review their practice in relation to drivers’ prior awareness of ESRs. The information which the GWR driver was provided with was in accordance with the intent of this recommendation, as far as the company was able to do, at the time the driver booked on. Recommendation 2 was that the rail industry should consider and review options for a safe and suitable means of providing drivers with warning of emergency speed restrictions on the route ahead through the use of available technologies.

This incident is an example of circumstances in which a warning of an ESR ahead would be valuable. The driver was misled by the way the lineside information was presented, which did not sufficiently highlight that the existing ESR had been modified such that passenger trains were now affected. The 30/125 ESR had been allowed to remain in place for some time without being converted to a Temporary Speed Restriction (TSR), which would have changed the information presented to the driver on this occasion and made it more likely that he would have responded to a newly-imposed ESR arising from the hot weather.

We have written to Network Rail and RSSB, copied to the Office Rail and Road, to alert them to this event and the circumstances surrounding the application of the speed restriction. We have also brought the need for action to implement the previous relevant recommendations to their attention.