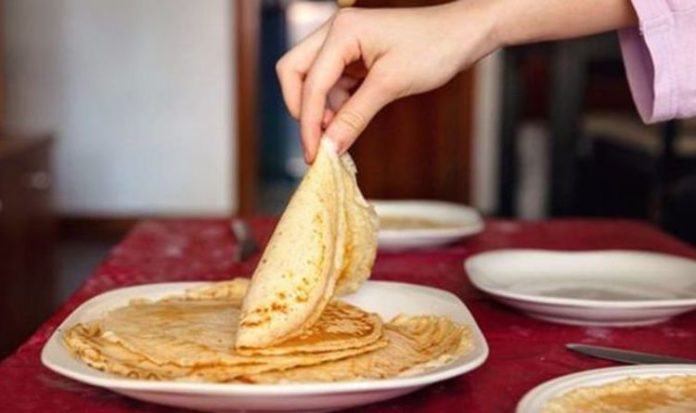 People across the globe are tucking into some ‘egg-cellent’ treats and posting their ‘flipping’ good photos and videos online. Pictures, memes and hilarious videos have been shared on Twitter through the morning. And it seems everyone is keen to show off their culinary masterpieces.

He wrote: “Happy #PancakeDay! Here’s a great way to make sure you’re a star at home today flipping your panckes!

“A great half term activity!”

In the clip Zak can been seen flipping a pancake in a frying pan several times before it landing on top of a fridge.

He wrote:  “I think I’ll stick to driving fast cars…”

Meanwhile innocent drinks posted: “With Valentine’s out the way it’s worth remembering that the true meaning of February is Pancake Day.”

The British Library shared a recipe on how to make the perfect 16th-century pancakes.

The recipe reads: “you’ll need ‘foure or five yolks of egs, a goodhandful of flower and two or three spoonefuls of ale’. Yum!”

Another said: “There’s a pint of cream also. Fascinating – I thought there would be some fermenting but there isn’t”

They said: “The Royal Chefs have suggested three ways to serve pancakes this #PancakeDay!

However you decide to celebrate Pancake Day this year I hope it’s ‘egg-squisite’.