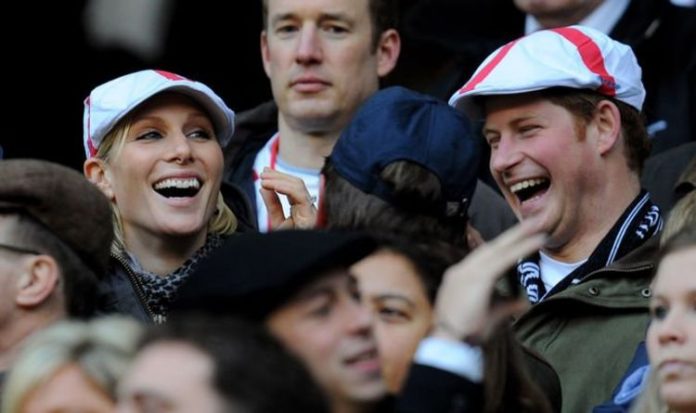 Zara Tindall, 39, is Queen Elizabeth II’s eldest granddaughter and was something of a mentor to her little cousin Prince Harry, 36, growing up. While Zara was raised without a royal title and has never been a working member of the monarchy she is a regular at family events and has often been snapped laughing with her cheeky cousin Prince Harry over the years.

Zara is a professional equestrian and is married to former England rugby captain Mike Tindall.

Prince Harry has always been a huge rugby fan and is vice-patron of the Rugby Football Union (RFU), a role he has held onto despite stepping down as a senior royal.

Zara and Harry are bonded over their love of sport and have often attended rugby matches and other events together over the years.

Both Zara and Harry are doting parents and each have babies on the way.

Harry has his arm around Zara’s shoulder and appears to be making a joke.

Zara responds to her younger cousin’s cheekiness by appearing to playfully chide him.

One of Prince Harry’s proudest achievements as a working royal was launching the Invictus Games – a tournament for injured veterans.

In 2014 both Zara and her husband Mike showed their support for the sporting project by joining Harry to take part in an exhibition wheelchair rugby match at London’s Copper Box Arena.

The sweet picture which was taken behind the scenes at the event shows a beaming Zara and Mike with their arms around Harry’s shoulders.

Body language expert and author Judi James analysed the picture of the royal trio and told Express.co.uk: “Close friendships can erode slightly when one person gets married and lives begin to take separate paths but this pose suggests Harry’s relationship with Zara only increased to include Mike, with Harry still very central to the new team of three.

“He happily poses between the couple here and they both look more than happy to let him, with Zara wrapping both arms around her cousin and tilting her head towards him to show close bonds. Harry has even placed both his arms around their shoulders in a ‘wings’ gesture.

“This suggests an interesting dynamic that might give more hints about the strong bonds at play here.

“In his own family group Harry was always seen as the young son between two higher-ranking alphas in his father can brother.

“With Zara and Mike though, there seems to be a tendency to promote a young Harry to a much more adult and dominant status that must have made him feel more confident and important.

“The signs of playful fun are still visible here but Harry is also allowed by Zara and Mike to be seen as hero of the day as he runs his beloved Invictus games. This pose allows him to look in charge while both Zara and Mike signal open affection and pride.”

In this second photo also taken at the Invictus Games wheelchair rugby match, Zara and Harry are pictured having fun as they compete.

The competitive cousins seem at ease as they laugh in one another’s company.

The warm-up match went ahead between the royals before the main competition took place that evening.

Judi said:  “Zara’s signature PDAs and her ability to use openly tactile and fun-loving behaviour would have made her a natural soulmate for Harry, whose more mischievous side would even be visible at more formal royal events.

“Harry always seemed to excel in the ability to make all his relatives laugh, including his grandmother and, back in the day, his brother, but with Zara there appears to have been a unique ability for mutually-prompted laughter and fun.

“They make a well-matched double-act and Harry’s extreme face-pulling and gesticulation here seems to show the extent of their ‘banter-style’ behaviour together.”

Both huge rugby fans, Zara and Harry seem in their element among crowds at an England vs France Six Nations rugby match in 2011.

The royal cousins were both captured roaring with laughter as they stand among fans in the stands.

They seem to be completely at ease in their surroundings and both of them are wearing novelty England flag hats to show their support.

Zara and Prince Harry seemed to share a tender moment when the Duke attended the Easter church service with rest of the Royal Family in Windsor in 2019.

The photo was taken days after Harry welcomed his first son Archie to the world on May 6 that year.

Commenting on the photo Judi said:  “The bonds between Zara and Harry weren’t all about being playmates, though.

“On this occasion, when Harry’s facial expression and tense hand clasp suggest some anxiety, Zara’s face-watching and expression of concern suggests empathy and more of a ‘big sister’ approach.

“She appears to be nudging Harry here, possibly keen to get his attention back and reassure him or cheer him up again.”