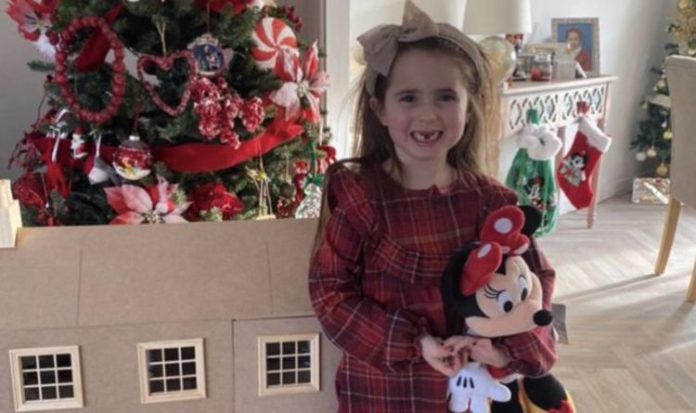 Lily McKelvey, six, was found to have diffuse intrinsic pontine glioma (DIPG) – said to be the most deadly form of child cancer – after falling ill shortly after Christmas. Her parents Jack and Lizzie have set up an online fundraising page to send “bright and funny” Lily to New York for treatment. The appeal brought in more than £80,000 in one week. DIPG affects up to 30 British children a year. They typically have a life expectancy of six to nine months.

Although Lily is having radiotherapy to try to control the tumour, only medics in America have a technique that could remove it.

The McKelvey family had been celebrating the news that Lizzie is expecting a son, but their world “came crashing down” when only child Lily became ill.

Jack, 31, said on the Go Fund Me page: “We have got to try everything we can.

“I cannot sit back after hearing my daughter has only months left to live.

“I wouldn’t be able to live with myself if I did not do all I could for her. Life without Lily is unthinkable. We have to fight for her. Our whole entire world came crashing down, the pain of how we are feeling is unexplainable.”

Lily’s aunt Lucy O’Sullivan said: “We have got to hope and pray that Lily becomes our little miracle. Lily is still very much living life and living it every day.

“Jack and Lizzie are living it with her, treasuring every moment, doing everything they can with her.

“She’s bright, really intelligent. She’s really funny and very girly – just a typical little girl. Her little brother is due in June and she’s really excited about that.”

Lily, who lives in Marks Tey, near Colchester, Essex, is halfway through 13 sessions of radiotherapy at Addenbrooke’s Hospital, Cambridge, in a bid to maintain her health levels as long as possible.

Her parents say they believe that the New York trip is their best hope of treating the tumour in the long-term.

News of Lily’s plight comes days after the death of Edie Jackson, seven, from the same kind of tumour.

● You can donate to Lily’s fund by visiting https://uk.gofundme.com/f/help-lilly-with-life-saving-treatment-in-the-usa