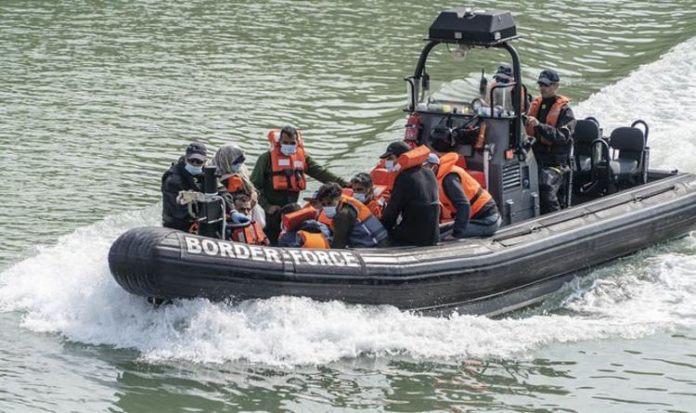 Gangs are trying to take advantage of fewer Border Force officers on duty over the Christmas period. But it is understood more officers will be on patrol and increased Border Force vessels will be available in the Channel than in previous years. The Home Office is today launching a social media campaign to target migrants using platforms such as Facebook, Twitter and Instagram in specific areas.

The videos will say that the UK asylum process “is no better, and gives no advantages over the French, Belgian or other EU member states’ asylum processes”.

And they will also counter common lies told by smuggling gangs, with the messages translated into Farsi, Arabic, Pashto and Kurdish.

Intelligence reports suggests that some gangs are charging as little as £300, with average costs for migrants now around the £500 to £1,000 mark.

A Home Office source said: “These vile criminals will stop at nothing to illegally smuggle people into the UK.

“The latest wheeze is cutthroat prices to exploit vulnerable women and children, enticing them to put lives on the line in a deadly crossing the UK.

“Our security services are doing everything they can to go after the criminals behind this human trade.”

The Home Office campaign will warn migrants they are at risk of drowning or freezing to death if they attempt the crossing in a small boat.

It will warn those considering climbing into lorries that they could be crushed if they hang on to the undercarriage of the vehicle.

Channel Threat Commander Dan O’Mahoney said: “We are determined to make this route completely unviable and are working tirelessly to stop migrants from coming to the UK illegally, at every step of their journey.

“Criminals are exploiting vulnerable people for profit and are selling false dreams of life in the UK. This new campaign will aim to dissuade migrants from making this dangerous and unnecessary journey.

“This will build on our work with the French to stop people leaving French beaches and dismantle people smuggling gangs, while also fixing the asylum system to make it firmer on those who seek to abuse it and fairer on those in genuine need of our help.”