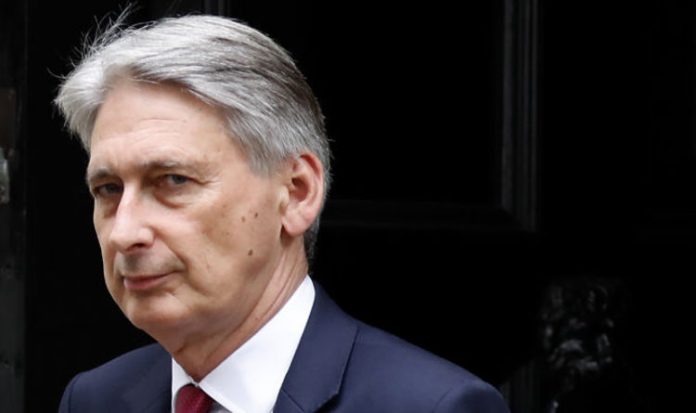 The Chancellor was told to edit documents from the Treasury, with claims it had ramped up the benefits of the UK’s current arrangement with the EU and downplaying any benefits of leaving, Government sources have claimed.

On Thursday ministers will publish the first of 84 technical documents which outline contingency plans of a no-deal Brexit next year.

But publication of the most controversial papers are likely to be delayed until next month.

A Cabinet source claimed around 15 of the papers “require further collective agreement” before publication.

They have been compared with Project Fear as the sections on the “current status” of arrangements with the EU are too “upbeat” and implications of a no-deal Brexit are seen as “negative”, according to two Government sources.

Project Fear was a phrase coined during the 2016 EU referendum in which the Remain campaign projected devasting outcomes following a vote to leave.

In one example, the then Chancellor, George Osborne, claimed the UK’s economy would go into a ‘DIY recession’ immediately following a vote to leave.

Sections of Mr Hammond’s documents have been redrafted to ensure they are more factual, sources told The Telegraph.

Treasury papers are thought to include reports on the impact on financial services, VAT and state aid from a no-deal.

The revelations come after a series of leaks suggested the Government was preparing to publish “Armageddon” scenarios for a no-deal Brexit.

The documents suggested there would be shortages of medicine fuel and food within two weeks of leaving the EU and the army would be on standby.

Brexit Secretary Dominic Raab insisted the technical documents should be “serious and sober” with officials blasting them as “project no fear”.

The Brexit Secretary will travel to Brussels today for talks with EU negotiator Michel Barnier.

It comes after the Government published a series of slides presented to the EU last month which warned Brussels against a “land grab” on the City of London.

The UK warned Brussels that the EU will suffer unless there is a special deal for financial services access.

Downing Street maintains the EU’s economy will suffer if the City of London is not offered a deal which goes beyond Brussels current standard for third countries.

The document reads: “If mutual market access is lost, independent analysis indicates economic benefits from UK FS activity relocating to the EU27 will be more than offset by negative fragmentation and lost efficiency impacts.”