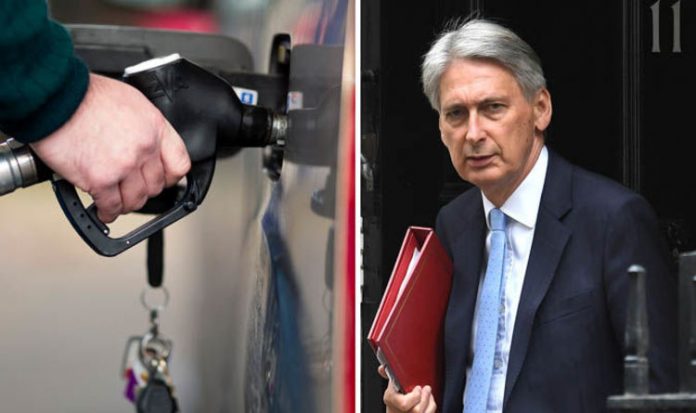 The Chancellor took a swipe at a Treasury analysis supporting the fuel duty freeze, hinting he will increase the tax on petrol and diesel in his upcoming autumn Budget.

Mr Hammond lashed out at the fuel duty freeze issued in 2011, arguing the government has “foregone” £46billion in revenue in the last eight years.

And, speaking to Conservative MPs concerned about the consequences of a potential rise of the duty, he added the Cabinet expects to miss out on £38bn more if the freeze continues.

This sum, he said is far larger than the one given to nurses and doctors every year.

Speaking in the House of Commons yesterday, the Chancellor said: “To support British households, the Government has frozen fuel duty for eight successive years, by April 2019 these freezes will have saved the average car driver £850 compared to the pre-2010 escalator and the average van driver over £2,100.

“But it is important that we remember the other side of this coin, the fuel duty freezes since 2011 have meant the Exchequer has foregone around £46bn in revenues through to 2018/19 – and a further £38bn will be foregone over the budget forecast period as a result of these previously announced freezes.

“For context, this is about twice as much as we spend on all NHS nurses and doctors each year.”

When urged by Tory MP Robert Halfon to consider the Treasury guidance drawn up in 2014, showing the freeze is offset by additional spending generated as a result, Mr Hammond said: “The analysis that he refers to is from 2014 and obviously that analysis would have to be looked at again in the context of the economy today.

“I do understand that the rise in oil prices and the feedthrough that has had to the pump does represent a very real pressure for motorists which of course we will take into account.”

But his argument didn’t go down well with motorists.

Groups campaigning against a raise warned last night such a move would not just affect those driving vehicles but could have a wide effect on the British economy, resulting in higher food prices and transport costs.

Jack Cousens, head of roads policy for motoring organisation AA said: “The Government talks about helping those who are ‘just about managing’, but a hike in fuel duty would be a hammer blow to household budgets across the country.

“Three-quarters of the nation’s freight is transported by road, so if the Chancellor carries through this threat we will also see shops increase their prices, as they simply pass on transportation costs to the consumer.

“The Government simply sees drivers as wallets on wheels.

“They are increasingly hit with higher charges for fuel, insurance and parking, but in return they get a road network that is riddled with potholes, congested and is rarely repaired.

“They are well within their rights to ask ‘What’s in it for us?’”

Mr Halfon, who is against any duty hike, also said the freeze effectively “helps the economy grows”.

He added: “At a time when millions of families are struggling with the cost of living, a rise in fuel duty wouldn’t just be a slap in the face, it would be a punch in the goolies.

“It would also hit businesses at a time when they need financial stability before we leave the EU.”

Mr Hammond’s latest take on the fuel duty comes after Mr Hammond told taxpayers in a letter to the AA last month to “contribute a bit more” in order to cover the pledged £20bn to the NHS.