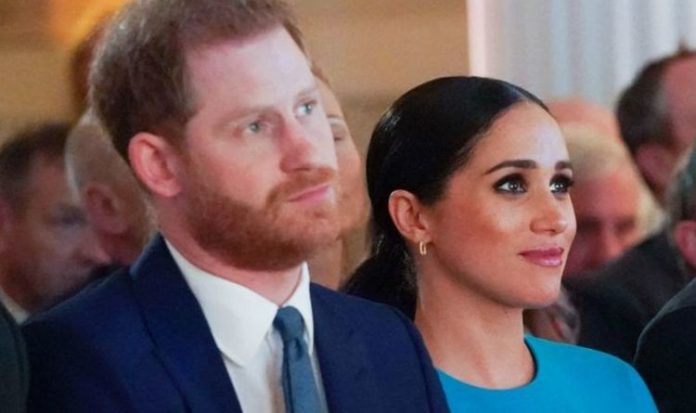 The Duke and Duchess of Sussex launched the new website for their charity project Archewell with a sweet nod to both of their mothers. The Good Morning Britain presenter took to Twitter to accuse the couple of “airbrushing” their dads, Prince Charles and Thomas Markle, out of the launch.

Mr Morgan wrote: “Sadly, Ginge & Cringe’s ‘compassion’ and ‘humanity’ doesn’t extend to either of their fathers, both of whom have been airbrushed out of this nauseating bilge.”

The Sussexes launched their new website with adorable pictures of themselves as babies with their mums.

In one photo Prince Harry can be seen as a young child sat on Princess Diana’s shoulders.

In another picture a young Meghan is stood with her arm around her mum Doria.

The website also includes a poem which called on people to “build a better world one act of compassion at a time”.

“Together we bring you Archewell. We believe in the best of humanity.

“Because we have seen the best of humanity. We have experienced compassion and kindness, from our mothers and strangers alike.”

Mr Morgan’s comments came after Meghan’s public fallout with her father which became the source of speculation when he failed to attend the Sussexes’ wedding.

The Duke and Duchess of Sussex shocked the nation earlier this year when they decided to step down as senior members of the Royal Family.

Since March, the pair have been living in the US with their baby son Archie.

Mr Morgan has issued a number of blasts to the royal couple as a presenter on Good Morning Britain and on his social media account.

He previously claimed the Duchess had “ghosted” him when she married Prince Harry.

The presenter said he was friendly with Meghan when she was a TV actress but turned her back on his friendship after the wedding.

He told The Mirror: “The moment she met Harry she cut everybody off who she thought might be no longer desirable in her friend and family circle.”

The Duke and Duchess of Sussex had their wedding in the spring of 2018.

Since their departure from royal duties, Meghan and Harry have signed deals with the streaming giants Netflix and Spotify.

The Duke and Duchess released the first episode of their podcast on Netflix this week.