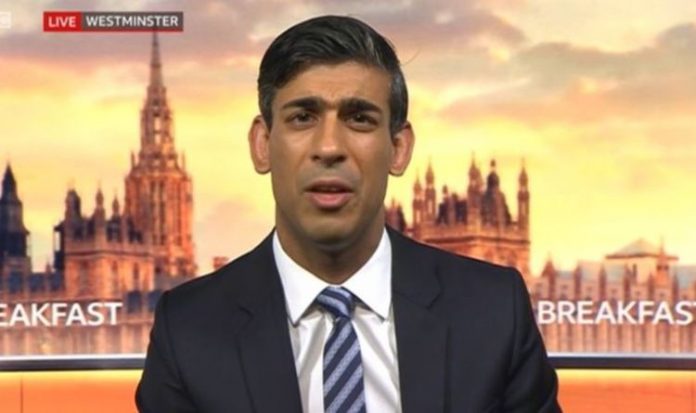 The Chancellor appeared on BBC Breakfast this morning to face a grilling over just how reliable the system is and whether it can be trusted to do its job effectively following a series of problems. Piers Morgan tweeted: “This is why Government ministers all go on BBC Breakfast – so they can lie and not be held to account for it.” Over the weekend, the Government said “an issue” had been identified overnight last Friday “in the automated process that transfers positive cases data to PHE”.

This meant the number of coronavirus cases published between Saturday and Sunday included 15,841 additional infections from between September 25 and October 2.

Mr Sunak was challenged about the various issues around reliability with Test and Trace and was told by BBC Breakfast host Dan Walker: “You were warned, we hear, about this system not being up to scratch. How can this happen?”

The Chancellor replied: “It should not have happened and an investigation has been launched, as the Health Secretary said.

“We have made a lot of progress in developing this test and trace system over the past few months.

The Chancellor attempted to defend the Test and Trace system (Image: BBC)

“If you think back to where we were at the beginning of this crisis, we were doing 10,000 tests a day.

“That is up 40 or 50 percent since the summer and is ramping up to over half-a-million by the end of October.

“We have made substantial progress. We have invested £12billion in this system, and it is making a real difference.

“We will always do better and we will keep at it.”

Dan Walker then challenged Mr Sunak on whether Test and Trace “can do its job”, to which the Chancellor snapped back: “I think it already is doing its job Dan.

“We are already testing 250,000 people a day, and hundreds of thousands of people are isolating as a result of that process.

“That is good because it helps us supress the spread of the virus.”

Dan Walker grilled the Chancellor over the Test and Trace system (Image: BBC)

Matt Hancock apologised for the glitch in the Test and Trace system (Image: GETTY)

But Peter Stefanovic, a lawyer and journalist who is also a Labour-backing political commentator, tweeted to his 147,000 followers: “We are now testing 250,000 people a day” says Chancellor Rishi Sunak unchallenged by #BBCBreakfast. That’s the figure for tests “processed” NOT people tested!

“This is why he boycotts @piersmorgan @GMB where he would have been challenged on this.”

This sparked a furious outburst from Mr Morgan, who replied: “This is why Govt ministers all go on BBC Breakfast – so they can lie and not be held to account for it.”

Earlier in his interview on BBC Breakfast, Mr Sunak had been asked to explain “what’s happened” to the Test and Trace system, with around 34,000 people possibly unaware they had been exposed to coronavirus because of what had happened over the weekend.

The Chancellor replied: “I would echo what the Health Secretary said yesterday – this should never have happened, and the priority now is to work as hard as we can to fix it.

“Over the weekend, several thousand man-hours were deployed in contacting all those we hadn’t contacted over the previous couple of days.

“As of 9am yesterday, over half of them had been contacted for a second time.

“For everyone that tested positive, they were contacted as normal and in particular, any test transmission at schools, hospitals and care homes would not have been affected by this because they are dealt with in a slightly different way.”

Mr Sunak later added: “We can also do population testing surveys every week to give a really accurate picture of what is happening with the virus through the Office for National Statistics.

“The extra testing capability also allows us to be more targeted in our interventions and be more localised in our approach.

“They are all tools we didn’t have at the beginning of this crisis that we do now.

“That is why this investment is paying dividends but we will keep working to make this system better and better every week and every month.”