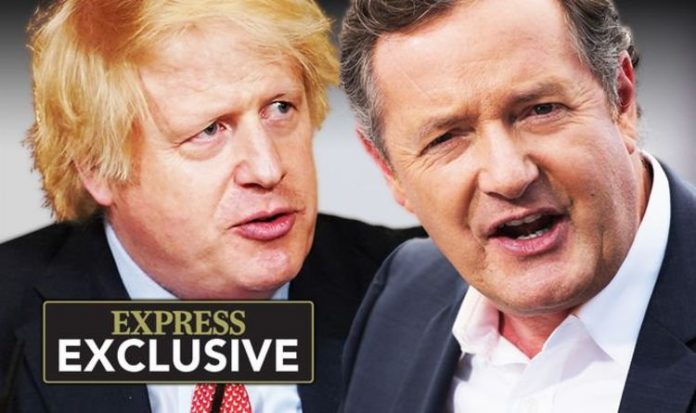 Piers Morgan has made a scathing assessment of Boris Johnson’s handling of the coronavirus crisis in an exclusive interview with Express.co.uk. The GMB presenter branded the Prime Minister “one of the world’s biggest bulls***ters” and suggested the pandemic could prompt his Government’s downfall.

Mr Morgan told this website the Prime Minister is in “real trouble”, as he now faces criticism from all sides.

He said: “The problem he has got is that right now his handling of the pandemic has been condemned by everybody: the opposition, most of the public, his own Tory MPs.

“In an effort to try and please everybody, which is his way, he’s ended up pleasing nobody. So I think he’s in real trouble.”

The journalist said the only thing going in his favour is that he has four years until the next general election and still commands a large majority in the House of Commons.

But despite this, Mr Morgan doesn’t hold back on his criticism of the Prime Minister.

When asked what Mr Johnson’s biggest mistake has been during the pandemic, he responded: “Well I think it is easier to say what hasn’t he made a mistake on.

“I’ve never seen so many massive errors of decision making, judgement or horrendous u-turns – which should never have been wrong in the first place.”

He went on to list the failings, including the supply of PPE to frontline medics, the care home fiasco, “dithering” over when to go into lockdown, A-Level and GCSE results and the travel quarantine restrictions.

JUST IN: Rishi Sunak told more must be done to help those suffering from long Covid

“It actually responds to very serious leadership of the type of Jacinda Ardern in New Zealand or Angela Merkel here in Germany.

“It responds to seriousness and taking firm decisions quickly.

“It doesn’t respond to bulls**t and I’m afraid Boris is one of the world’s great bulls***ters and he has been found out.”

Mr Morgan further criticised the Prime Minister’s handling of the coronavirus pandemic in his new book, Wake Up.

The journalist charts the key dates and events of 2020, and points out the Government’s failings when they happen.

At one point he writes: “The duty of any Government is to keep its people safe and to protect public health.

“This Government has spectacularly failed in that duty driving this crisis so far.”

The GMB presenter said voters will eventually have the chance to hold Mr Johnson to account for his “dithering” and “disastrous” handling of the pandemic.