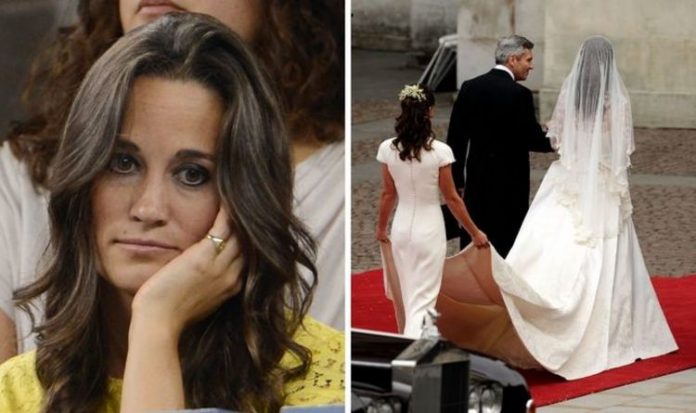 Pippa dazzled huge TV audiences across the globe in her role as the Duchess of Cambridge’s Maid of Honour during the spectacular royal ceremony in 2011. Such was the impact of her appearance, the public instantly took her to their hearts and became obsessed with Kate’s sibling and the intricacies of her life. Although Pippa has remained largely out of the spotlight since, she has used her profile to help charities raise millions of pounds, through her own fundraising work and ambassadorial roles.

Yet, she did reveal how difficult life had become following the royal wedding, particularly her newfound fame.

Pippa said: “There is a lot of the pressure I get in London, just in my day-to-day routine. Occasionally I might get followed by paparazzi and that has been a bit difficult.

“It’s getting used to, sort of, not being entirely private and feeling that wherever I go, that maybe someone will spot me, and for good or bad it just means that I don’t entirely get to relax.”

Speaking to TODAY’s Matt Lauer six years ago, Pippa discussed the “unexpected” way the public had taken to her, and particularly their love of the dress she wore to Kate’s wedding.

She confessed the plan “was not really for it to be a significant dress” as it was “really meant to blend in” with Kate’s train.

Asked whether she found the attention “embarrassing”, Pippa claimed it was because the dress was “meant to be insignificant”.

The praise Pippa won was not all universal, however, as an angry host tore apart her appearance during a CNN broadcast in 2014.

Pippa caused outrage in the US after she admitted that her dress “fitted a little too well”.

But his female colleague then snapped back, saying: “Why is everybody so whacked out? And saying it fit too well? It seems so innocuous that comment.

“She was stunning, yes, she upstaged the bride. Ok!”

In April, the Cambridges will celebrate their 10th wedding anniversary.

Since their union, the couple have gone on to have three children – Prince George, Princess Charlotte and Prince Louis.

It is predicted that on the day of their wedding – April 29, 2011 – more than one million people lined the route between Westminster Abbey and Buckingham Palace.

Pippa shares a special bond with George, after he played a major role in her wedding in 2017, carrying out the role of page boy.

But he stole the headlines after being spotted crying during proceedings, having to be taken off by mother Kate for a quick talk to calm him down.

The Middletons’ mother Carole also discussed the pressures, including what it was like to be a parent in the build-up to a royal wedding, with her daughter marrying a future heir to the throne.

According to the MailOnline in 2018, she said: “I think the most important thing, as a parent, is to listen to what your daughter wants.

“You can have all the ideas in the world, but it has to be about them. And don’t muscle in on the guest list.”

Away from royal life, Pippa is highly regarded for her love of exercise and staying fit, regularly competing in endurance events and races across the globe.

She once completed a 3,000-mile cycling race across the US and a seven-kilometre swim in Istanbul to raise money as part of her role as an ambassador to the British Heart Foundation.