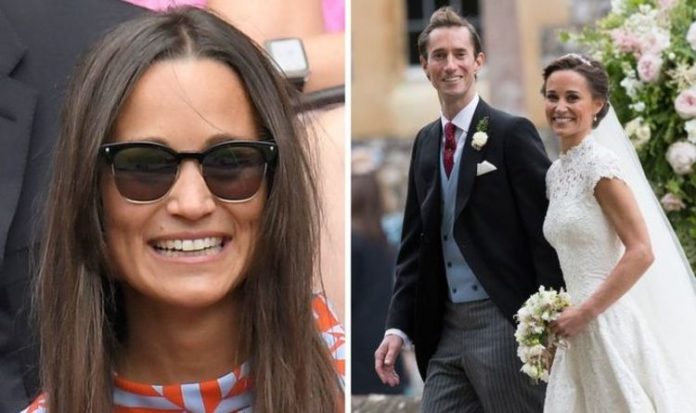 Kate Middleton’s sister has been thrust further into the spotlight during the coronavirus pandemic, as Royal Family fans turn to follow other relatives of the Firm after Prince Harry and Meghan Markle’s exit from senior duties. Windsors are constantly scrutinised for the decisions they make, and as the country is hit by a recession the finances of the royals has been further analysed. Pippa, who married James in 2017, isn’t a member of the Royal Family, but is associated with them through her sibling Kate, who married Prince William back in 2011.

Reports show that both the Middletons and Matthews’ paid for their special day three years ago, but the true price of their wedding left some observers to condemn the decision to spend so much on the event.

Pippa rose to prominence during her sister’s wedding, as she stole the show in her role as Maid of Honour.

Since then, she has maintained her public profile by becoming an ambassador of numerous organisations, including the British Heart Foundation.

Yet, when the panel on ITV’s Loose Women discussed wedding costs three years ago, Pippa and James came under attack, including by celebrity Katie Price.

At the time, it was suggested by host Ruth Langsford that the wedding cost £250,000, or as she described it “the price of a house”.

She continued: “The average wage in the UK is £27,000 and the average cost of an average wedding, so we are saying that is a lot of money. But even for someone on the average yearly wage, £27,000 [for a wedding].”

Katie then responded: “Well, I have to say it is disgusting but mine and Peter [Andre]’s wedding cost more than that.

“Ours was just under one million pounds, but we did it with OK magazine, so our fee paid for the wedding. But when I look back at it, I didn’t enjoy the day.”

JUST IN: Prince George, Charlotte may have Christmas video call with cousin

Later analysis showed that the wedding itself may have actually cost nearly three times as much as originally thought.

Breaking down the costs, they explained that the high expense was due to having “one glass palace, two venues, two receptions, two dresses, three wedding cars, two photographers, two videographers and three florists”.

Hamish Shephard, founder of the company, said that weddings have become “increasingly lavish over recent years”, which he argued was because couples were getting married when they were older.

He added: “Couples don’t need to spend hundreds of thousands to have an incredible day, today’s savvy couples find ways to save on average £10,147 on their big day so get very happily married without breaking the bank.

“With the month of May being outside the expensive peak summer wedding months, even Pippa and James will have likely had some discounts from their suppliers.”

Pippa has continued to remain a favourite among royal observers, and she is often celebrated for her brilliant, selfless work, in raising money for a plethora of charitable organisations.

The 37-year-old is widely known for keeping a low profile away from the Royal Family, yet during one interview Pippa discussed her relationship with Kate, and how that had altered since she joined the Firm.

When asked how things had changed between the two sisters, she said: “Not particularly, I mean obviously she has pressures that she’s taking on and things but we spend a lot of time together.

“We still do a lot together as a family and I think that sort of the part for all of us is having a really close family that we can sort of be normal with each other, treat each other normally and that sort of keeps us fixed to the ground.”

Outside of royal life, Pippa is highly regarded for her love of exercise and staying fit, regularly competing in endurance events and races across the globe.

She once completed a 3,000-mile cycling race across the US and a seven kilometre swim in Istanbul to raise money as part of her role as an ambassador to the British Heart Foundation.

Then in 2015, alongside husband James Matthews, she participated in a 47-mile swim, in honour of her partner’s brother who lost his life while on a mountain climbing trek.