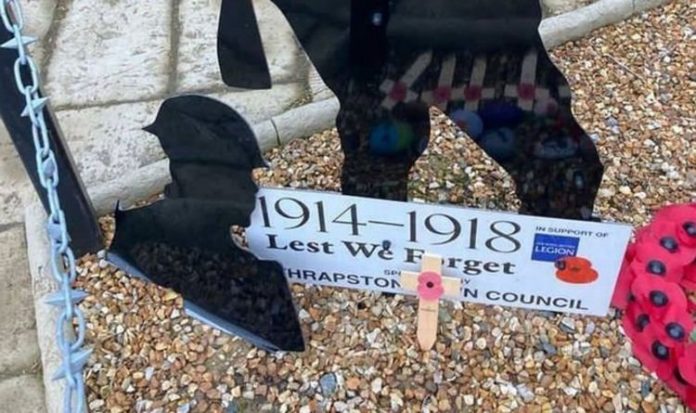 Authorities launched the probe this morning after discovering pictures of the desecrated monument on social media.

Officers have already started conducting enquiries and are searching for CCTV footage that may help their investigation.

A member of the police department said: “This is clearly a very upsetting incident for the town of Thrapston and we are doing all we can to track down the offenders.

“Officers will be patrolling the town over the weekend to show a visible presence and to reassure the community.”

“We are heartbroken to find that the silent soldier who stands over Thrapston’s War Memorial has been irreparably damaged” said a council representative.

“This week we have thanked those who have sacrificed so much through a series of Remembrance events.”

“If you have any information, please report it to the police.”

The incident is one of many acts of vandalism launched on war memorials across the UK in the past fortnight.

Responding to the offences, Tory MP Jonathan Gullis said he will “not sit idly” as war memorials in the UK are desecrated.

Mr Gullis is calling for tough new laws that will treat all acts of vandalism on war memorials and graves as the same offence.

He told MPs: “Every war memorial in every village, every town and every city across our country is sacred and serves as a reminder of this immeasurable gratitude we must afford to our armed forces both past and present.

“The passage of time always presents the danger of dimmed collective recollections. Let’s not forget the sacrifice and bravery of those who paid the ultimate price.

“Young men and women who gave up their futures, their loves, their lives and their dreams to ensure the freedoms they once knew were protected from tyranny for us, the unborn generations who sit idly by as monuments dedicated to their eternal memory are desecrated.