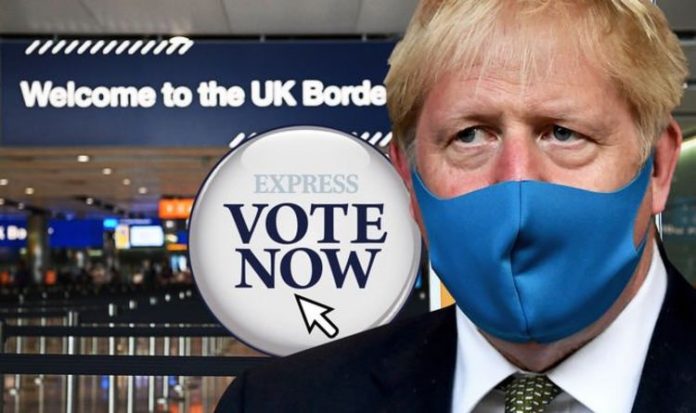 Home Secretary Priti Patel is understood to be one of the leading advocates for a temporary closure of all UK borders, in a bid to stop potentially vaccine-resistant strains of coronavirus entering the country. But Mr Johnson is cautious about implementing such a strict measure and favours an Australian-style hotel quarantine approach instead.

Ms Patel suggested the travel ban should be introduced until the hotel quarantine system has had time to be rolled out, according to insiders.

Health Secretary Matt Hancock is also understood to be in favour of tougher travel restrictions, such as closing the UK borders, to prevent the new strains from being imported into the UK.

But the Prime Minister has rejected the calls from the two leading ministers in a crunch meeting of the Government’s Covid operations committee last night, according to The Times.

Instead, Mr Johnson is expected to announce a mandatory quarantine hotel stay for UK arrivals returning from 30 high-risk countries, including South America, Brazil and Portugal.

South Africa and its neighbouring countries will also be on the list, as a new strain was identified there earlier this month.

Non-UK residents from these countries have already been blocked from entering Britain.

But the hotel quarantine measures face some logistical issues that will take several weeks to iron out.

Firstly, the Government will need to find sufficient space in hotels for the 10,000 travellers who fly into Britain every day.

READ  Joint statement by the UK and Singapore

The ruling will also require new legislation which could take as long as three weeks to implement.

As a result, bosses of some of Britain’s biggest airlines have written to Mr Johnson demanding “an urgent roadmap for the reopening of air travel”.

They wrote: “What is clear is the dramatic impact that restrictions – both current and should hotel quarantine be introduced – will continue to have both on UK airlines, and the wider UK economy.

“It is essential that a clear set of conditions are agreed allowing for the easing of all travel restrictions.

“This roadmap is vital for retaining consumer confidence and securing the future of UK aviation as we approach the critical summer trading period.

“Each day the UK is isolated from the world [is] causing untold economic damage, both to the UK’s essential aviation infrastructure – its airlines, airports and ground handers – but also to those businesses that depend on the UK’s connectivity within a global economy.”

The signatories include the CEOs of British Airways, easyJet and Virgin Atlantic.