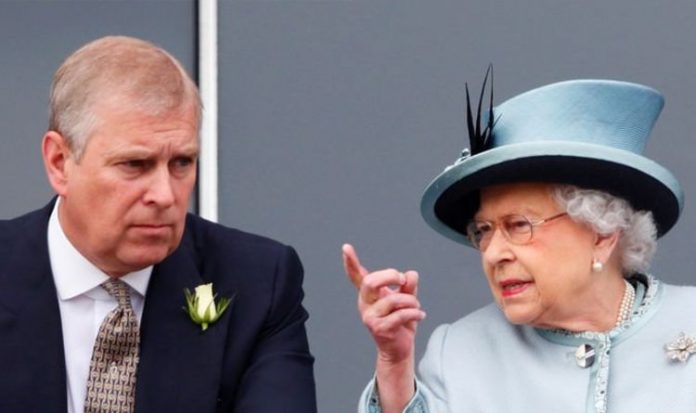 Andrew’s association with the convicted sex offender, Jeffrey Epstein, was called into question when the disgraced financier was arrested again in July 2019. Epstein pleaded not guilty to charges relating to sex trafficking, and then killed himself in jail before his trial. Andrew faced international backlash in the months that followed while the US authorities continued their investigation into a potential sex trafficking ring, which may have been led by Epstein.

The royal chose to tackle this criticism head-on in a BBC Newsnight interview with Emily Maitlis — only for the frank discussion to be dubbed a “car crash” which put both his and the Royal Family’s reputation at risk.

The Duke of York subsequently took early retirement from royal life and has rarely been seen in public since.

However, he is still listed on the official Royal Family’s website as one of the Queen’s five Counsellors of State.

The royal.uk website explains: “In the event that the Queen cannot undertake her official duties as Sovereign on a temporary basis due to illness or absence abroad, two or more Counsellors of State are appointed by Letters Patent to act in Her Majesty’s place.

“By law, Counsellors of State include the Sovereign’s spouse and the next four people in the line of succession who are over the age of 21.”

Andrew is the Queen’s second son, and so at the time of his birth, he was second-in-line to the throne.

As Prince Charles — the heir apparent — had his own children and subsequent grandchildren, Andrew has been pushed further and further down the line of succession.

As a result, the current Counsellors of State are Prince Charles, Prince William, Prince Harry and Prince Andrew — alongside Prince Philip, who was chosen because of his role as the sovereign’s spouse.

The royal website explained: “Counsellors of State are authorised to carry out most of the official duties of the Sovereign, for example, attending Privy Council meetings, signing routine documents and receiving the credentials of new ambassadors to the United Kingdom.”

Yet, there is a limit to their power; Commonwealth matters, the dissolving of Parliament, the creation of peers and the appointment of a Prime Minister are all constitutional functions which cannot be delegated to Counsellors.

Some royal watchers feel it is surprising Andrew remains in such a position of power as one of the five Counsellors of State, after he described one of his own former friendships as a “major disruption” to the monarchy.

He has been kept out of sight at all major events ever since his retirement, even in the photographs of his daughter Princess Beatrice’s wedding.

He was stripped of his £249,000 annual income from the Sovereign Grant, too, although the Duke of York is allegedly still funded via the Queen’s private income.

Even for his 61st birthday earlier the month, the Palace’s gesture on social media was a far cry from its usual reaction to royal birthdays.

There was no mention of his HRH title or his Dukedom in the short post, and only photographs from his childhood were used to honour the occasion rather than recent images.

Andrew will also be pushed down to ninth place in the line of succession when Meghan and Harry’s second child is born later this year.

However, it’s worth noting that Andrew’s father, 99-year-old Prince Philip has been retired since 2017 and yet he is still listed as a Counsellor of State.

Harry, sixth-in-line to the throne, is also still listed as the Counsellor of State — despite setting up permanent roots in the US over the last year, and recently confirming he has no intention of returning to royal life.