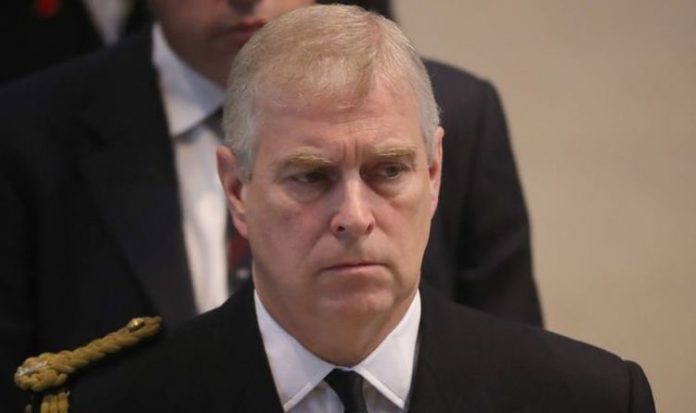 Andrew stepped back from royal duties following a disastrous Newsnight interview over his relationship with Jeffrey Epstein. However he was allowed to retain a number of prominent military appointments.

On Friday Buckingham Palace announced the Duke and Duchess of Sussex, who stepped down as working royals last March, have lost their royal patronages and Harry must hand back his military titles.

In a statement it said: “The Duke and Duchess of Sussex have confirmed to Her Majesty The Queen that they will not be returning as working members of The Royal Family.

Despite not undertaking any official royal duties since 2019 Andrew continues to hold a number of military roles.

He is commodore in chief of the Royal Navy’s Fleet Air Arm and admiral of the Sea Cadet Corps.

The Prince is also colonel-in-chief of a number of British Army units including the Grenadier Guards.

READ MORE: Prince Andrew – How did the Duke of York break a 104-year record?

“Most of these military titles require events of their royals 2-3 times a year.

“They’re online now. When we go back, Harry can come over or still do via Zoom.

“There’s no practical reason he should lose them.

“Other royals who work have military titles, eg Prince Michael.”

The tweet posted yesterday has since gained 13.9k likes.

One person replied: “They should be taken from him he is a disgrace but Harry is not.”

Two others branded it “double standards”.

Prince Harry served in the British army for ten years, achieving the rank of captain.

He was sent on combat deployment to Afghanistan on two occasions, though the first was cut short when news was leaked to the public.

The Prince will retain his patronage of the Invictus Games, a charity he helped set up to help injured service personnel.

She said: “Harry holds the services very dear. He set up the Invictus Games.

“The servicemen and women he meet love him.

“People want to see him punished instead of standing up for his wife.”

Buckingham Palace declined to comment when contacted by Express.co.uk.