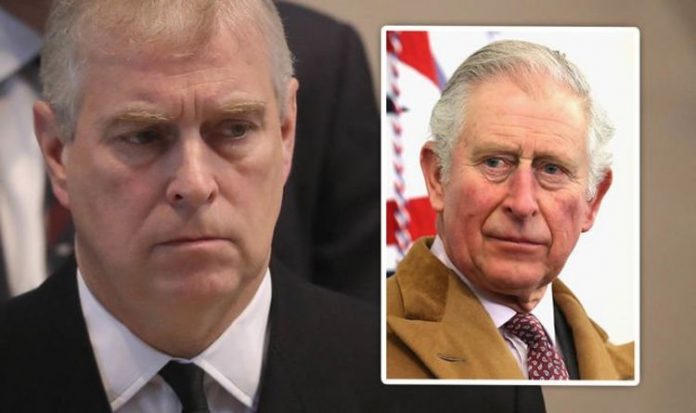 Prince Andrew could face huge changes should he be allowed to return as full-time working member of the Royal Family, according to royal author Nigel Cawthorne. The Duke of York, who has always enjoyed a degree of independence in his work and charitable ventures, would likely need to undergo the scrutiny of the heir to the throne Prince Charles upon his return to work, the expert said.

Mr Cawthorne, author of Prince Andrew, Epstein and the Palace, told Express.co.uk: “If Andrew were ever to return to a public role, he will have to submit every plan and engagement to his brother first with no more direct recourse to the Queen.”

While he is officially on leave, Buckingham Palace has quietly removed his social media handles from royal.uk, the Royal Family’s website.

A date for Prince Andrew’s return to royal duties has also not been confirmed.

Until early August, the royal website listed all the social media accounts of senior royals – including the Queen, Prince Charles, the Cambridges, the Sussexes and Andrew.

But Express.co.uk understood this move was due to these three royals’ changing status.

Mr Cawthorne said removing Andrew’s social media channels from royal.uk had not only likely been a bitter pill to swallow for the Duke of York, but also a suggestion of what the future could look like for him at Buckingham Palace.

He said: “Prince Andrew is still an HRH and technically on a sabbatical, but it is nigh beyond doubt that the autonomy he enjoyed since 1982 has come to an irrevocable end.

“As Prince Andrew has craved public attention from an early age it must be a bitter pill, one as painful and humiliating as if Twitter had removed Donald Trump’s account.

“The Yorks’ social accounts were the last paraphernalia of Andrew’s royal independence, and the palace is signalling what lies ahead.”

Painting a gloomy scenario for the York, Mr Cawthorne added: “In addition, he won’t have his own staff anymore and will likely have to rely on Charles’s office for everything, including his older brother’s approval.

“There is just no money left to fund his travelling in style with a footman who irons his trousers.”

In the wake of the backlash created by his 45-minute interview focused on his association with Jeffrey Epstein, Prince Andrew gave up to several patronages and charities, including his entrepreneurship scheme [email protected]

Since November, the Duke of York has disappeared from the public eye, and has been spotted only a handful of times driving his car outside his home, the Royal Lodge.

On Christmas Day, Prince Andrew was seen on a walk on the Queen’s Sandringham Estate with her younger daughter Eugenie first and Prince Charles later.

However, despite being in Sandringham, the Duke decided not to attend the 11am service with other royals.

In January, he was also seen heading to church with the Queen.

At the height of the lockdown, the Duke was photographed by Antonia Marshall, Sarah Ferguson’s private assistant, preparing and delivering care packages for care workers at a hospice in Windsor.