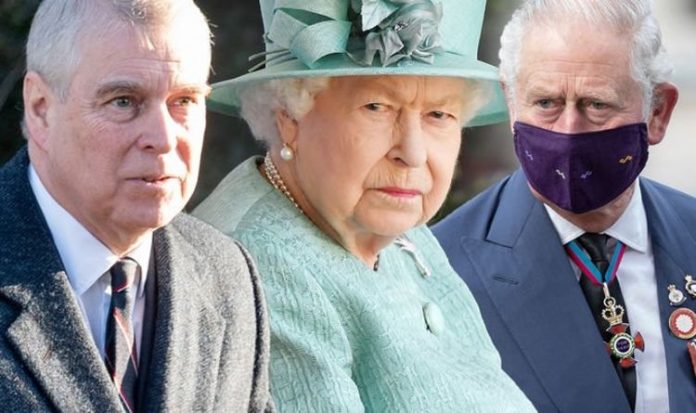 Charles is the oldest and longest-serving heir apparent in British history He has previously joked that he fears he will never ascend the throne as he reaches his later years – with the Queen pledging to work in the role past her 100th birthday As with any Royal Family throughout history, reports over infighting and battles over gaining the crown have been rife.

Charles is the oldest of his three siblings and so was destined to the throne from birth.

Yet, many say when Charles does get the chance to lead, he may well pass it on to his son, Prince William.

The Prince of Wales has reportedly had opposition from his first brother, Andrew, in the face of his future rule.

Andrew is said to be “opposed to Charles’ rule”.

TheTalko claimed a driving factor in relations between the brothers souring was a result of infighting over the throne.

On YouTube, it said: “According to insiders, Prince Andrew doesn’t think Prince Charles should be the King.

“He’s apparently been very vocal with the Queen about this.

“What he’s even more upset about is the slimming of the succession for the crown.

JUST IN: Princess Diana ‘wanted to flee’ before wedding to Prince Charles

Despite him being handed the keys to the monarchy, Charles’ upbringing is said to have been less than favourable to his later development.

It was previously reported how his formative years were marred by an absence of both the Queen and Prince Philip.

Her Majesty is said to have once left both Charles and his sister Princess Anne while she toured the Commonwealth.

It said: “Charles was never really close to his parents while growing up,” going on to say that it wasn’t until after the Queen had given birth to Andrew and Edward that she “dedicated more time to caring for her family”.

It went on to claim that Andrew was, in fact, the Queen’s favourite.

This included in the aftermath of Andrew’s interview with BBC Newsnight which discussed his friendship with Jeffrey Epstein.