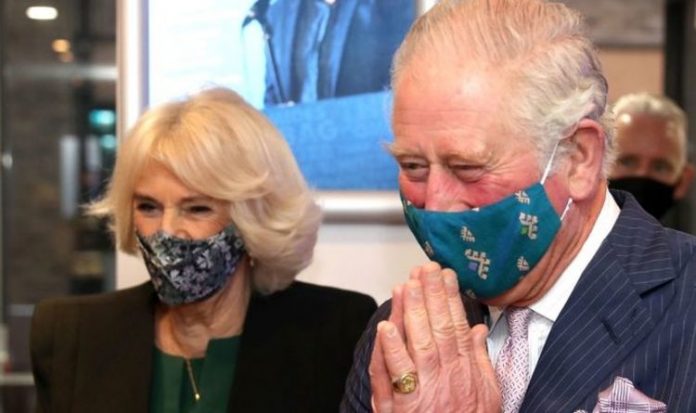 Prince Charles and Camilla visited one of London’s most famous locations, The 100 Club, to support London’s nighttime economy. The pair were wearing face coverings as the meeting took place indoors, but appeared to be in high spirits as they were welcomed with smiles and cheers by staff.

The Prince of Wales and the Duchess were given a tour of the location before enjoying a live performance by singer and songwriter Emily Capell.

The royals enjoyed Ms Capell’s show, as Camilla could be seen smiling beneath the face covering, while Prince Charles was following the rhythm by tapping on the table.

Today, Prince Charles and Camilla also visited Soho Theatre, where they were welcomed by staff and London Mayor’s Sadiq Khan.

With their visit, the couple, known to be supporters of the arts, aimed at encouraging people to return to entertainment venues now that London has become once again a Tier 2 area.

Tier 2 areas continue to be subjected to stringent regulations.

However, venues that have been made COVID-secure have been allowed to reopen their doors.

Among the locations people can now visit there are museums, shops, pubs, restaurants and leisure and entertainment venues.

READ MORE: Prince Charles and Camilla still likely to see Queen but when?

Places of worship as well as personal care services were also allowed to reopen.

The second national lockdown in England ended on December 2.

Yesterday evening, Prince Charles and Camilla stepped out of their residence also to invite Britons to return to museums.

The couple headed to the National Gallery, where they enjoyed a private tour to two new exhibitions focused on Artemisia and Titian.

Prince Charles has been the patron of the gallery in Trafalgar Square since 2017.