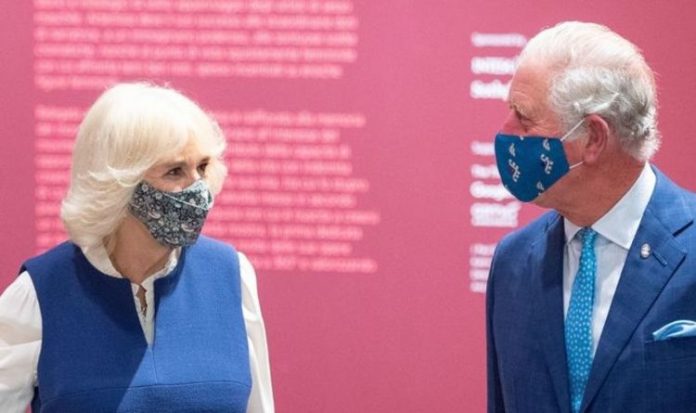 Prince Charles and Camilla marked the end of the second national lockdown in England with a visit to one of the prince’s most beloved patronages – the National Gallery. The couple enjoyed a unique tour of two new exhibitions, ‘Artemisia’ and ‘Titian: Love Desire Death’, into the empty gallery in Trafalgar Square.

While Prince Charles was at the National Gallery as its patron, Camilla joined him as a supporter of the British arts, heritage and tourism industry.

This poignant visit, aimed at inviting the public back to galleries and museums which have adopted measures to make their venues COVID-safe, comes as the royal couple continues to suffer vile abuse online.

On November 24 Clarence House turned off the possibility to comment under its tweets to everyone but people it mentions or follows.

Asked at the time the reason behind this move, Clarence House did not comment.

Prince Charles is the heir apparent to the throne (Image: GETTY)

However, several harsh critics of the couple continue to share their messages by retweeting the royals’ content.

Yesterday, the Prince of Wales and Duchess’ Twitter account shared four pictures of the royals at the gallery with a brief caption.

This tweet received more than 40 quote retweets within hours, many of which were attacks against Charles and Camilla.

While many shared insults, one Twitter user wrote: “I wish you never become a king!”

Prince Charles and Camilla were given a private tour of two new exhibitions at the National Gallery (Image: GETTY)

Another appeared to mock Prince Charles for having famously said “whatever in love means” during the engagement interview with Princess Diana.

They wrote: “Love Desire Death huh. Whatever (in) Love means.”

This famous quote was portrayed also in the fourth season of The Crown, which heavily focuses on Princess Diana, Prince Charles and Camilla.

The Netflix show has been accused of distorting the truth for the sake of fiction by several royal commentators.

Experts have warned about the dangers this could do to the monarchy and in particular to Prince Charles and Camilla, who have spent years to build public trust and support.

Royal author Sally Bedell Smith said Prince Charles and Camilla did not have an affair throughout the whole marriage with Princess Diana as suggested in The Crown.

She told Vanity Fair: “He did not enter into the marriage cynically, thinking he could keep a mistress on the side.

The expert also warned this season of The Crown could “undo all the good feelings about Charles and Camilla”.

She said: “Because viewers believe incorrectly that The Crown is true, this season, in particular, could undo all the good feelings about Charles and Camilla and resurrect the hostility from two decades ago.

“It will also reinforce the false mythology that Diana was the sainted victim.”

Following Clarence House’s latest tweet, some royal fans made their voice heard against the critic.

One wrote: “Well done C&C. Both looks wonderful as always.”

Another pleaded critics to stop attacking the pair, saying: “People please leave them alone so they can unlock the comment section.”

During the first national lockdown, Charles and Camilla’s Twitter account experienced a flourishing of positive comments and a major growth in followers.

The Clarence House Twitter handle saw an increase of followers in its online platform of about 20 percent, according to Vanity Fair.

Speaking about a newfound love for social media and a new, more personal approach to it by the royal couple, an aide told the magazine in June: “The Prince and Duchess were in lockdown like everyone else and couldn’t be seen in person, so they wanted to find another way to connect with people.

“They hadn’t done many social media messages before, but they quickly realised this was the way forward and a means of being visible and immediately connecting with people, which is what they always want to do.”