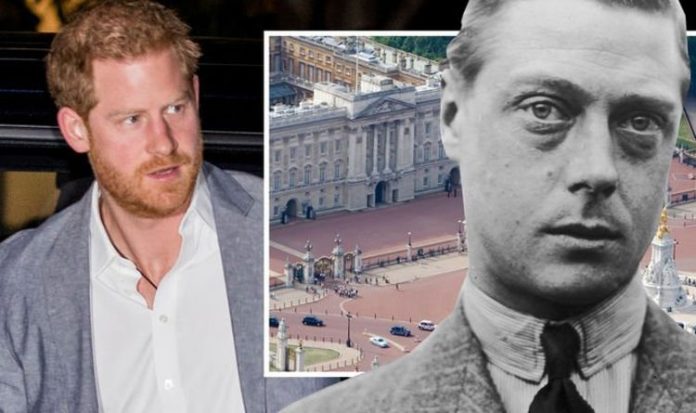 Charles, following royal tradition, served in the Royal Navy for five years. His son, Prince Harry, had wanted to go into the Army his whole life and so served for a whole decade. He was determined to get involved with active service, too, and pushed for the Palace to let him go on two different tours of Afghanistan where he would be able to be closer to the action.

While the Palace were reluctant, Harry suggested dropping out of the Army altogether if he was not allowed to go, leaving the royals — particularly the Queen — completely torn.

In her 2018 book, ‘Harry: Conversations with the Prince’, author Angela Levin explained: “As Queen, she was Commander-in-Chief of the Armed Forces and could sort out a posting, but she was also the grandmother of a young man she wanted to protect who was desperate to fight for his country on the frontline.”

At the time, Harry was third-in-line to the throne.

So, the Queen and Charles decided that for “Harry’s sake they had to try” and get him close to the military action.

Harry when he was serving in Afghanistan (Image: Getty)

Even so, his father confessed that he had been worried when Harry returned home in 2008.

Charles told the press: “As you can imagine, it’s obviously a great relief as far as I’m concerned to see him home in one piece.”

However, Harry is not the first prominent royal to push to be involved with the more dangerous side of the military.

King Edward VIII — later the Duke of Windsor — was enthusiastic to join the Armed Forces when war first broke out in 1914, even though he was the Prince of Wales at the time.

He was commissioned as a Second Lieutenant in the Grenadier Guards, but was then forbidden to go overseas with the First Battalion.

He questioned Lord Kitchener, then the Secretary of War, whether he might be able to serve in France.

However, the minister refused even though Edward claimed it would not matter if he died — he had four brothers to succeed him.

Edward was forbidden from serving in the frontline to protect his life (Image: Getty)

But Lord Kitchener’s worries lay with the future king being captured by the German Army and being used as a pawn, rather than his death.

King George V then insisted Edward should be restricted to serving in staff appointments, after his heir had lobbied hard to be allocated a junior staff officer role in France far behind the frontline.

He narrowly avoided danger even then — a German shell hit his car and killed the driver, just as the royal had left the vehicle to inspect the troops — but nothing seemed to deter the royal from getting close to the frontline.

BBC History Extra’s report from 2017 explained: “Edward pushed the boundaries, using every opportunity to visit the front lines and ultimately, was able to get moved to a position nearer the front.

“Assigned to staff work on logistics, Edward now had an excuse to be in dangerous locations and believed it important that he shared in what ordinary soldiers were going through; he visited advanced positions and found himself under shell fire in front-area dug-outs many times.”

Edward would later recall: “I got the most vivid close-ups of the horrible existence that had become the lot of the British soldier.”

She claimed that when he was serving, he “was a relatively anonymous figure, which he revelled in”.

He said in 2011: “My father’s always trying to remind me about who I am and stuff like that.

“But it’s very easy to forget about who I am when I am in the Army.

“Everyone’s wearing the same uniform and doing the same kind of thing. I get on well with the lads and I enjoy my job. It really is as simple as that.”

Earlier this year, during a leaked prank call, Harry also confessed: “I was in the military for ten years so I’m more normal than my family would like to believe.”

The Duke of Windsor’s abdication in 1936 has also been compared to Harry’s decision to leave the royal frontline earlier this year, too, although, as Prince Charles’ younger son, the Duke of Sussex did not cause a constitutional crisis unlike Edward VIII.

Charles said it was a great relief when Harry returned home after serving in Afghanistan (Image: Getty)

Even so, it appears both men became disillusioned with royal life during their time in the Army.

She added: “Bitter at not being allowed to fight, Edward developed a deep resentment with his role as Prince of Wales for being the cause of this prohibition.”

Additionally, Harry appeared to fight back against the restrictions of being a royal long before he officially stepped down.

He told author Angela Levin back in 2017 that he aches to be “something other than Prince Harry”.

After Harry’s request to have a wreath laid on his behalf at the Cenotaph last weekend — in honour of Remembrance Day — was rejected, royal watchers believe a line has been drawn in the sand between him and the rest of the royals.

He visited the Los Angeles National Cemetery with his wife Meghan Markle, for his own ceremony instead.

Similarly, the Duke of Windsor tried to reach out to the Royal Family after his abdication, but he felt he was effectively in exile for the rest of his life in France.