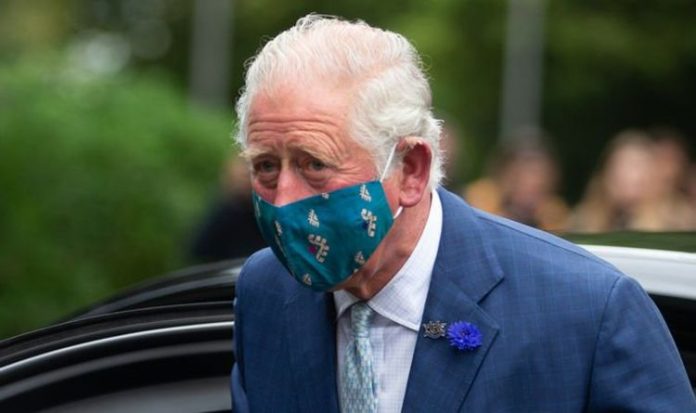 Prince Charles, 71, wore a face mask in public for the first time as he visited Northern Ireland with the Duchess of Cornwall to thank key workers for their efforts during the pandemic. The Duke of Cornwall suffered from coronavirus in March as royal commentators noted his royal engagement was the first time he was spotted in a mask. Maggie Rulli explained that it is “very scary” for Charles to be out as it is possible to catch COVID again.

Speaking on ABC’s Heirpod, royal expert Omid Scobie said: “Charles has become the ambassador for coronavirus in the Royal Family being the only one that had been affected by it.

“I think it was interesting to see him in a mask this week because I think he had been the one who had been the most careful about shielding himself having already gone through those symptoms.”

“He was one of the first high-profile people and we were all very worried considering his age and high-risk factor.

“What’s interesting now is there is so much unknown with this virus.

“Yes, he’s had it once but we know there are instances of people catching it again.

“We don’t know what the long-term ramifications are of having the virus.

“I think for him it must still be very scary to be back out there in the world when numbers are rising throughout Europe.”

On the visit, Charles stepped from his chauffeur-driven car wearing the blue cotton face covering when he arrived at the Ulster Museum, but quickly pocketed the cloth item as Camilla removed her mask.

The coverings, made by artisans from Burma, are being sold for £6.50 on the website of the prince’s Turquoise Mountain, a charity which works to protect heritage and communities at risk around the world.

Camilla has worn a face covering in public a number of times as have the Duke and Duchess of Cambridge but Charles, who has been carrying out public duties for a number of months in mainly outdoor settings, has not been seen wearing one before.

Turquoise Mountain supports weavers in Burma and the prince’s mask was made by Nuu Nuu Pan whose family fled ongoing conflict in the region and has been living in a refugee camp since 2010.

Charles was also sporting a plaster on the top of his left ear.

The prince and his wife spoke to nurses outside the building and thanked the health workers who transitioned early from Queen’s University Belfast and the Open University into clinical roles amid the health crisis.

Bronach Best, who works in mental health, said everyone had pulled together as a community of staff.

“I think the public have been great, there was one occasion when I was going shopping in my uniform, and met a mum with her son who was wearing a Spiderman costume, and she said, ‘look there is a real life hero there’,” she said.