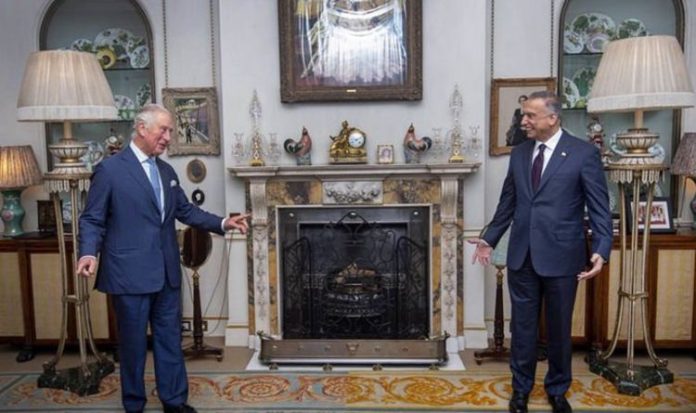 Prince Charles and Mr Al-Kadhimi have been photographed staying at a safe distance from one another as the royal welcomed the politician into his home. The meeting took place behind closed doors at Clarence House, as confirmed by the palace.

The picture shared by Clarence House shows the Prince of Wales smiling at Mr Al-Kadhimi with his arms wide open.

Similarly, the Prime Minister looked back at the royal with a smile on his face and arms open as they remained two metres apart in line with the coronavirus guidelines issued by the UK Government.

The Iraqi leader landed in the UK yesterday evening.

Mr Al-Kadhimi is currently undertaking a tour of Europe during which he will meet his country’s strongest allies and the continent’s leaders.

Britain is part of a US-led international coalition tasked with helping Iraqi security forces in the fight against what remains of the Islamic State.

The UK and the rest of the coalition have also pledged to provide Baghdad with military equipment and training for Iraqi forces.

READ MORE: Prince Charles could be KEY to solving Harry and William ‘rift’

During his visit, Mr Al-Kadhimi also headed to Downing Street to hold talks with his British counterpart, Boris Johnson.

Prior to his arrival to Britain, Mr Al-Kadhimi had already been to France to meet French President Emmanuel Macron and Germany to hold talks with Chancellor Angela Merkel.

This isn’t the first time Prince Charles steps in for the Queen in welcoming a foreign leader.

In mid-June, Prince Charles and Camilla, Duchess of Cornwall, hosted Mr Macron, welcoming him to Clarence House ahead of a touching ceremony to mark the anniversary of Charles De Gaulle’s Appel.