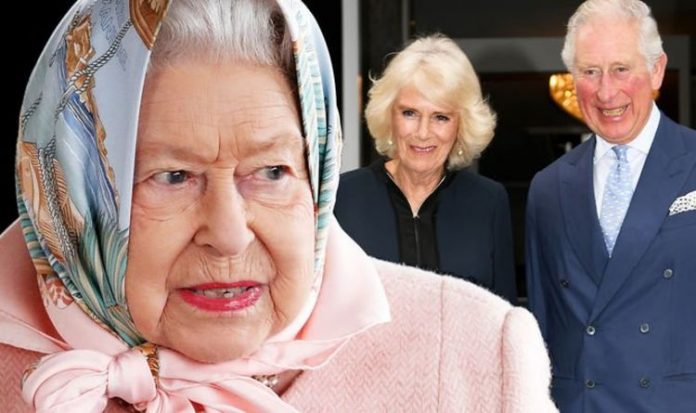 Her Majesty’s eldest son, who will celebrate his 72nd birthday on Saturday, is the first in line to the throne. His mother is the longest reigning British monarch after ascending as Queen in 1952. But royal commentator Robert Jobson recently claimed the Queen could step down from the monarchy and make Prince Charles King when she reaches the age of 95 in April next year.

The Prince of Wales could then be able to reign with Camilla “by his side” after she became a member of the Royal Family following their civil marriage in 2005.

A source told Us Weekly: “Charles will serve as King with Duchess Camilla by his side.

“This is something he’s dreamed about his entire life — he sees it as his birthright.

“Her Majesty would find it extremely difficult to deprive him of that.”

It has not been confirmed what title Camilla would receive once Charles becomes King.

Camilla has faced controversy in the past after she was seen as part of the reason why Charles’ first marriage with the late Princess Diana ended.

As a result, she is likely to receive the title of Princess Consort, rather than becoming a Queen.

Charles did hint at Camilla’s potential title during an interview with NBC’s Brian Williams in 2010.

READ MORE: Prince Charles made most of ‘long period in waiting to be king’

After the wedding, Camilla gained the title Her Royal Highness The Duchess of Cornwall.

This was so Diana could remain as the only Princess of Wales.

Camilla’s relationship with the Queen has not been plain-sailing over the years.

Charles first fell in love with Camilla in the 1970s, but it has been widely reported Her Majesty and her royal advisers were able to put a stop to the romance in the beginning.

But the Queen and Camilla’s relationship appears to now be on better terms, meaning the Queen is unlikely to stop Camilla being by Charles’ side when he becomes the monarch.

Mr Jobson previously said the pair bonded over a love for horses.

He said: “It was a slow burn. They obviously had to build their relationship.

“They both have a shared love of horses. They are both outdoorsy, both country ladies.”

Earlier this year, Buckingham Palace said the Queen has no intention of stepping down despite the ongoing coronavirus pandemic potentially putting her at more of a risk during public engagements due to her age.