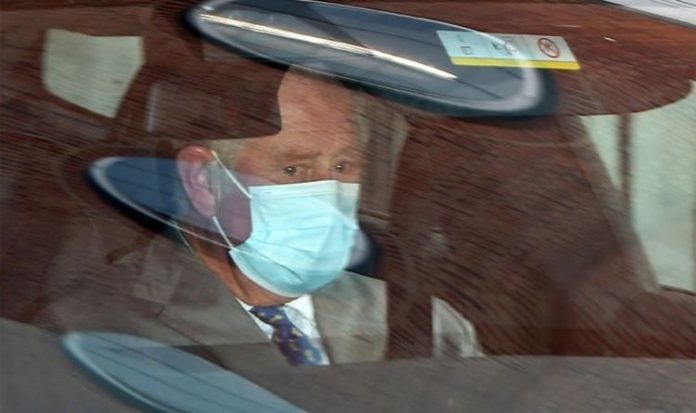 Prince Charles visited his father in London from Gloucestershire, a 200-mile round trip. The Duke of Edinburgh was paid a visit by his son the Duke of Cornwall on Saturday, the day after Meghan Markle and Prince Harry handed back their titles and patronages.

While observers noted Charles looked “teary” at King Edward VII’s hospital, Penny Junor suggested he may have been visiting his father to share news about the Sussexes.

And a MailOnline editorial has speculated that Charles’ decision to go home to Gloucestershire and not stay close to London “could be a sign that his father’s condition is stable”.

Separate reports suggested he planned to stay in London.

Following Prince Charles’s visit on Saturday ITV royal editor, Chris Ship tweeted: “We understand that Prince Charles has not returned to Highgrove in Gloucestershire but has instead gone to stay the night at Clarence House in St James’, London.

“No updates from Buckingham Palace on Duke of Edinburgh.”

READ MORE: Prince Charles may have wanted to ‘tell Prince Philip about Harry’ during hospital visit

Ms Junor, royal author, admitted she did not know why Charles made a 200 mile round trip to see Philip.

Ms Junor told PA: “We do all know he doesn’t like fuss, and he would regard a visit as fuss.

“Momentous things are happening in the family at the moment and I suppose it’s perfectly possible that Charles wanted to go and talk to his father and reassure him about Harry.”

Philip was reportedly informed by Queen Elizabeth II of Meghan and Harry’s decision not to return to the working royal life.

The Duke is said to have been “very disappointed” by the Sussex royals decision according to Ian Lloyd, royal author.

He said to the Telegraph: “Prince Philip will have been very disappointed because his focus in life is to support the monarchy.

“He would have been very saddened that the younger royals don’t see it that way.

Buckingham Palace confirmed yesterday Charles did not stay the night in London, instead opting to return to Highgrove the same say he visited Charles.

Ms Junor previously claimed a visit for Philip would only come if the Royal Family was concerned about the Duke’s health.

In an interview with BBC Breakfast on Thursday, she said the Royal Family tend to “play down these things and carry on with their businesses”.

But if there was cause for concern with Philip, “the Queen would definitely find a way of getting there, and probably Prince Charles as well”.

Other sources weighed into why Charles paid his father a visit in hospital.

One close to Charles said to the Telegraph: “The Duke has been in hospital a few days longer than expected and the Prince simply wanted to go and see him.”

Another Buckingham Palace source claimed the Duke’s condition had not changed, and added doctors were simply acting with “an abundance of caution”.

Insiders have previously said Philip is in “good spirits” while at hospital, and Buckingham Palace has confirmed the stay is not related to coronavirus.