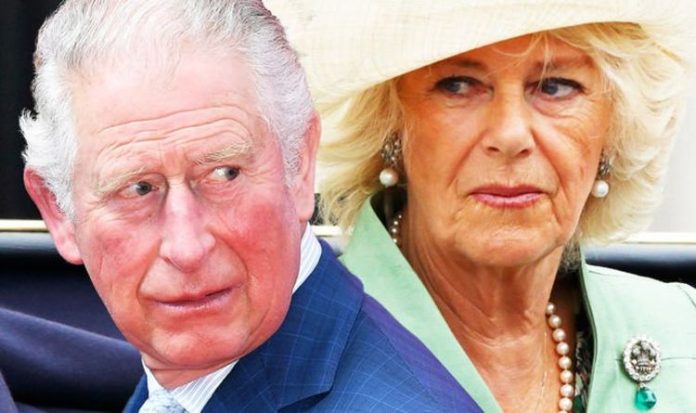 Camilla, Duchess of Cornwall, 73, and Prince Charles’s, 72, love story is far from straight forward. While they dated briefly in their 20s, Camilla then went onto to marry Andrew Parker Bowles. Their relationship reignited during Charles’s marriage to Princess Diana and the affair became a national scandal.

Princess Diana and Charles finally divorced in 1996 but the Princess of Wales’s tragic death in a car crash in 1997 made the prospect of Charles and Camilla marrying unthinkable until years later.

The Queen finally approved the marriage in 2004 and Charles and Camilla tied the knot in a civil ceremony on April 9, 2005.

More than a decade later, the public outrage surrounding their affair has waned and the royal couple have gained in popularity.

Prince Charles is first in line to the throne and will take over when Queen Elizabeth II, 94, can no-longer serve.

The title Camilla will take when Charles is king is still up for debate as many question whether she will be known as Princess Consort, as Clarence House confirmed on their wedding day or as Queen Consort if Charles sees fit.

Camilla’s future title will depend on how the British public perceive the Duchess at the time of Charles’s ascension.

However, public opinion aside, one royal biographer has claimed the impact Camilla has had on her husband is “wonderful.”

Royal expert and author of several royal biographies including “The King and Di: The True Story”, Howard Hodgson claimed Camilla’s effect on Prince Charles may be compared to the unquestionable influence of his key mentor Lord Louis Mountbatten.

Mr Hodgson told Express.co.uk: “After the Prince himself; the Duchess of Cornwall, whose support and love have had a wonderful effect on her husband; I think we can safely say that Lord Mountbatten’s understanding of a teenage boy who lacked self-esteem, has helped give us the world respected Heir to the throne that we see before us today’.”

“A dutiful Queen was all to often an absentee mother, while his father, who had endured a harsh childhood himself, seemed to believe that a kindness and gentleness in his son’s nature should be banished for the good of the nation.

“Later on, as Prince Charles entered his teens, both parents, now in middle age, adopted a more caring and gentle attitude to their younger sons Prince Andrew (the Queen’s favourite) and Prince Edward (the Duke of Edinburgh’s favourite).”

“His grandmother, the Queen Mother and his great uncle, Lord Louis Mountbatten, had recognised in Charles that goodness and kindness to others were qualities to be admired and encouraged.

“They both also understood that beneath Charles’s fragile self-confidence there was a strong will and a determination to succeed.

“In particular, Lord Louis realised that encouraging him and supporting him would allow Charles to develop the qualities needed for a hugely demanding future as Prince of Wales and future king.”

Prince Charles is celebrating his 72nd birthday on Saturday but the milestone is likely to be marked without fanfare given the current lockdown.

Camilla and Charles are understood to be currently based at Clarence House from where they carried out a series of Remembrance Day engagements over the past week.

The couple led the nation in Remembrance on Armistice Day with a visit to the grave of the unknown warrior at Westminster Abbey.

On Sunday they will travel to Berlin to take part in Germany’s national day of mourning.