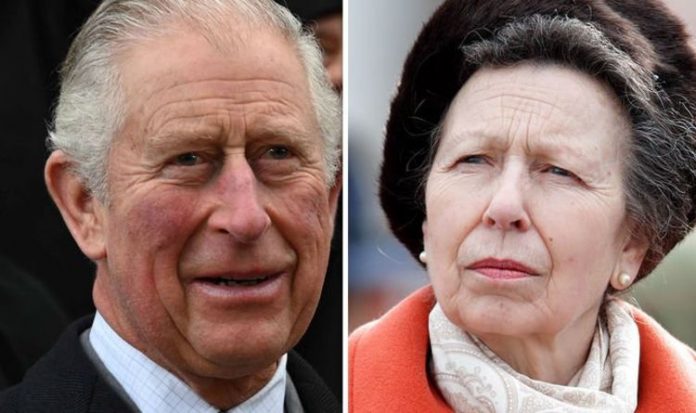 Princess Anne, 70, has gained huge traction among royal fans for her tireless approach to royal duty carrying out hundreds of engagements every year. In previous years it has often been the Princess Royal who has carried out more engagements than any of her fellow family members. However, Prince Charles now seems to be closing the gap after becoming the hardest-working royal for two consecutive years.

2020 was an extraordinary year for the whole of Britain, including its Royal Family and the Covid-19 pandemic wreaked havoc with the Windsors’ ability to conduct their duties.

Usually, senior royals, including Queen Elizabeth II, 94, spend much of their time out and about on royal visits and meeting members of the public.

However, the number of engagements they were able to carry out this year was hugely reduced due to the pandemic.

According to research by Patricia Treble, the number of official engagements conducted by the Royal Family dropped from 3,470 in 2019 to 1,529 this year due to the pandemic – a 56 percent fall.

READ MORE: Princess Anne 2020 in pictures: How UK ‘fell in love’ with Anne

Prince Charles was once the busiest royal with 256 engagements while Anne had the second-highest number at 224.

Princess Anne marked her 70th birthday on August 15 and has seen a huge rise in popularity among royal fans.

To mark her birthday ITV produced a special programme offering a behind-the-scenes insight into the Princess Royal’s extremely busy the life.

The documentary included interviews with those closest to Anne including her two children Zara Tindall, 39, and Peter Phillips, 42, who both praised their mother’s extraordinary work ethic.

One expert has claimed 2020 was the year Britons “fell in love” with Anne as her stoic approach to royal duty was much-appreciated amid the pandemic.

After analysing photos of Anne taken over the past year, body language expert and author Judi James told Express.co.uk: “2020 was the year that the public finally fell in love with Princess Anne.”

Judi added: “Her very practical approach to life meant she wore outfits that had lasted several decades rather than following any fashion trends, and her love-life looked equally down-to-earth, with her second husband Tim [Laurence] keeping a low profile and no sign of any romantic PDAs, even on their wedding day.

“It hasn’t been any change in Anne that has created her current surge in popularity, it has been a change in the public’s values and outlook.”

Zara is currently expecting her third child with husband Mike Tindall and Anne is understood to be excited about welcoming her fifth grandchild next year.

Given that Gloucestershire was under Tier 2 restrictions on Christmas Day, Anne and her family could have enjoyed the holiday together at her home, Gatcombe House.

Anne showed she was a vital support to the Firm by attending a senior royals’ reunion with the Queen at Windsor earlier this month.

The engagement was to thank local volunteers for their help during the pandemic and was the first time the royals had been out en masse in months.