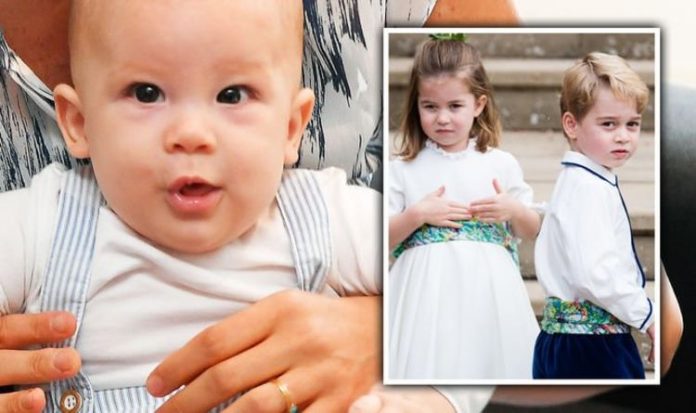 Meghan Markle, 39, and Prince Harry’s son Archie Harrison is expected to be raised in the USA miles away from his royal cousins. Following Archie’s birth in May 2019, royal fans were excited to see him grow up alongside Prince George, seven, Princess Charlotte, five, and Prince Louis.

However, Meghan and Harry’s royal stepdown and subsequent relocation to the States means Archie is unlikely to see much of his cousins growing up.

While Prince William and Kate, Duchess of Cambridge both got to meet Archie it is not known if he was ever introduced to George, Charlotte and Louis too.

Meghan and Harry have kept their UK home Frogmore Cottage and were expected to return to Britain for Royal Family events in the wake of their withdrawal – but the coronavirus pandemic has stalled any international travel plans for now.

While the Sussexes were reported to have accepted an invitation to stay with the Queen and Philip at Balmoral this summer, the trip is now understood to be off the cards.

Constitutional expert, Iain MacMarthanne explained that before 2013, all royals were required to seek permission to marry regardless of where they stood in the line of succession.

He said: “Prior to the Succession of the Crown Act 2013 all descendants of George II, under the terms of the Royal Marriages Act 1772, unless the issue of a princess who had married into a foreign royal family, had to obtain the sovereign’s permission to marry in order to retain their rights in succession.

“The 2013 Act sought to bring multiple pieces of outdated and discriminatory legislation relating to the monarchy up to date.

“Through this Act male primogeniture was abolished, allowing the firstborn child irrespective of gender to become heir apparent.”

“The disqualification from inheriting the throne by marrying a Catholic was removed; and the Royal Marriages Act of 1772 was repealed, resulting in only the first six in line to the throne being required to obtain the sovereign’s permission.”

Prince William’s children are currently third, fourth and fifth in line to the throne and will have to get permission to marry too.

However, there is a chance George, Charlotte and Louis could exempt Archie from the royal rule if one of them marries and has children before him.

As doing so would push Archie down the line of succession.

Mr MacMarthanne said: “Should the children of the Duke and Duchess of Cambridge wish to marry, they will be required to seek the sovereign’s permission.

“Rather than moving further away from this requirement the Cambridge children will move closer when their grandfather, the Prince of Wales, inherits the throne.”

The only way Archie may be freed from this obligation is if either George, Charlotte or Louis marry and have children before him which would bump him down the line of succession.

Mr MacMarthanne explained: “Indeed, with this movement, as things presently stand, it might be anticipated that the Duke and Duchess of Sussex’s son, should he marry, will have to seek the sovereign’s permission unless one of his three cousins marry and have children first, as he will be sixth in line when his grandfather is king.”