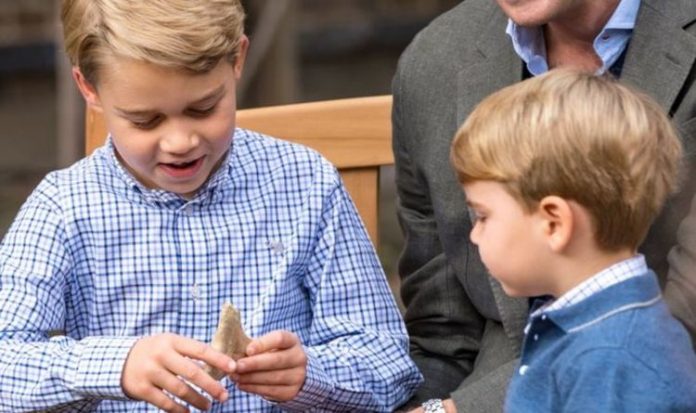 Royal commentators have pointed out a previously unseen detail in the a picture of Prince George which was described as “sweet” because of the occasion. The young royal was joined by the rest of the Cambridge family when they met Sir David Attenborough at Kensington Palace. Royally Obsessed podcast hosts Roberta Fiorito and Rachel Bowie discussed the group’s fashion choices.

Ms Fiorito asked her co-presenter: “Did you see there was like a little elephant embroidered on George’s shirt?

“It was on the little pocket. I saw it and zoomed in on it.

“I don’t know if they had it added or if that was just how the shirt came.

“I don’t know where the shirt was from but I love the little tiny detail.”

Ms Bowie said she had not noticed the feature but called it “sweet” considering the reason for Sir David’s visit.

The legendary natural historian had joined the Cambridges to screen his new feature documentary.

The podcast hosts noted that this may have massively influenced the royals’ outfits for the picture.

Ms Fiorito added: “With this climate change documentary, going for sustainability was a really smart move on her part.

“Also who knows if it’s a shout out to Meghan Markle since it’s one of her favourite brands? Hopefully, I’d love that.

“Louis re-wore his older brother’s sweater that George had worn in Canada at the tea party.

“So the coordination was master level.”