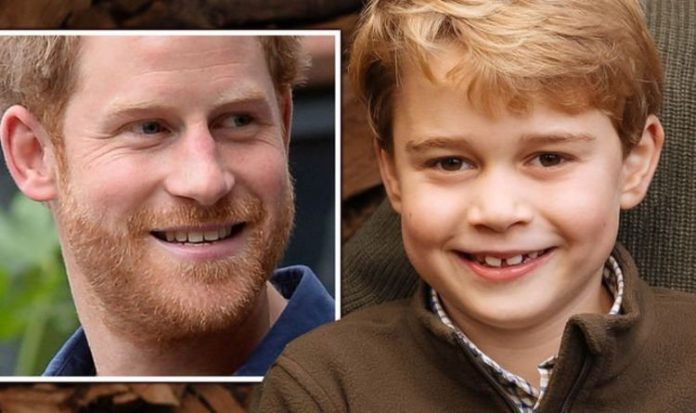 During Channel 5’s documentary, ‘Secrets of the Royal Palaces’ Ken Wharfe discussed the moment Prince George and Savannah Phillips were seen joking around with each other at the 2018 Trooping of the Colour ceremony. Ken Wharfe compared this to the moment Prince Harry covered Princess Beatrice’s mouth during the 1990 Trooping of the Colour ceremony and labelled the young prince a “joker”.

Mr Wharfe said regarding Prince George and Savannah Phillips’ antics: “Harry was a joker and still is.

“The younger children like Beatrice and others are the same.

“I think it is what children do.”

Eagle-eyed royal fans that spotted the similarity between the two moments took to social media.

Another tweeted: “History repeating itself! Blows my mind’.”

Prince George is third in line to the throne behind Prince Charles and Prince William.

Prince Harry was previously third in line to the throne before his older brother William had children.

“Yet they retain their position in the royal line of succession and their royal titles.

“They have made their position very clear, they have gone against the Queen and disrespected the Royal Family.

“I think personally it is time the Royal Family woke up to the situation that they not coming back.

“They need to be taken out of the line of succession.”