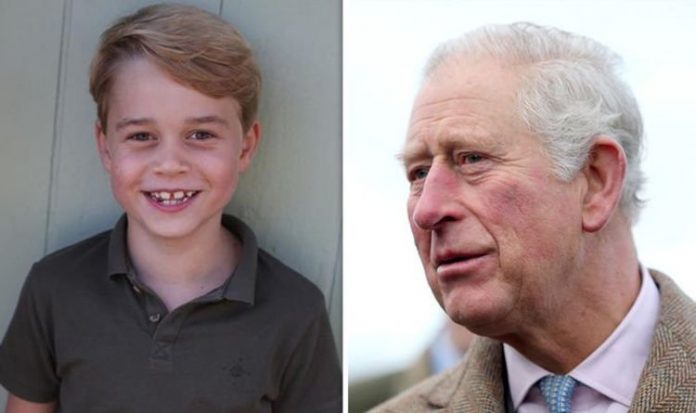 Charles became the first-in-line to the throne after his mother, the Queen, became the monarch in 1952. He was three years old at the time. When he was just nine years old, the Queen announced that he was to become the Prince of Wales. He was not officially invested until he turned 20 in 1969, but Charles has carried the weight of being the heir to the throne his whole life.

He is now the oldest heir to the throne in British history at 72 — at an age when most workers have retired, he is still preparing for the greatest job of his life.

As the third-in-line to the throne, this is a cross Prince George may have to bear, too.

BBC Radio 4’s ‘The Royal Activist’, released in 2014, explored how Charles had struggled to define his role as an heir.

Journalist Elinor Goodman explained: “When Charles took his oath as Prince of Wales in 1969, he faced the classic choices of the heir to the throne — no job specification, other than to wait.”

Prince Charles during his investiture as the Prince of Wales in 1969 (Image: Getty)

Constitutional historian, Professor Vernon Bogdanor, told the programme: “Previous ones [heirs] haven’t really known what they should be doing during what could be a very long time waiting.

“Now, the Prince of Wales could have done absolutely nothing.

“He could have avoided all controversy by spending all his time in nightclubs and enjoying himself.

“He’s chosen not to do that, but to undertake practical activities.

“He’s the first heir to the throne to have found a role for himself.”

Prince George with his family, the Cambridges (Image: Getty/PA)

While the Queen was the heir to the throne from the age of 10, she became the monarch at the young age of 27 so did not encounter the same drawn-out dilemma Charles has as the future sovereign.

The previous Prince of Wales, who became King Edward VIII, was known for his partying ways and was seen by many palace insiders as an unfit figure to rule.

When he abdicated in 1936 and left the throne to the Queen’s father, King George VI, it taught a valuable lesson to future heirs.

It was clear successors would learn to avoid any behaviour which could associate them with the exiled Duke of Windsor — and this is something Charles took to heart.

Prince William, second-in-line to the throne, has been accused of being a ‘reluctant royal’ (Image: PA)

William’s eldest Prince George will inherit the throne after him (Image: Getty)

So Charles sought to make a change to society and set up the Prince’s Trust, which has become astonishingly successful.

Ms Goodman explained how, in his years of waiting, Charles has redefined his role. She noted: “He has also developed a philosophy of his own.

“A sometimes contradictory mixture of the nostalgic and the far-sighted; the traditional and what some would dismiss as cranky.”

Charles has also developed the reputation for being a “meddling” royal due to his activism, but he has promised to put campaigning aside when he becomes the sovereign.

Charles’ adviser Jonathan Porritt also explained: “He is extremely clear about this notion that we cannot take decisions today that constantly undermine the life decisions and expectations of the people tomorrow.”

Charles is set to inherit the throne after his mother, the Queen (Image: Getty)

Prince William, second-in-line to the throne, has been accused of being a reluctant royal in the past.

He did not become a working royal as soon as he graduated university, but joined the RAF and later became a full-time pilot with the Search and Rescue Force.

Insiders speculated for years that the royal was not up to the job as future monarch, because he hated being in the spotlight.

However, the Duke of Cambridge has since embraced his role fully, and has become the Royal Family’s main representative during lockdown.

His eldest, seven-year-old George, is set to inherit the crown after his father and will have to find his own way to adapt to the undefined role which is being the heir to the throne.