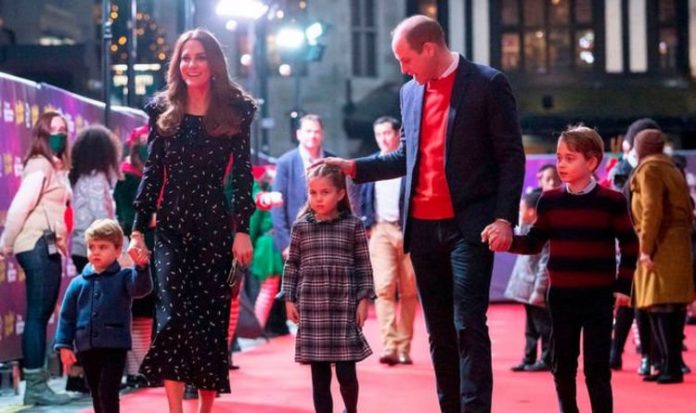 Kate and Prince William have so far spent the third national lockdown at Anmer Hall, their home in Norfolk. But the upcoming announcement by Prime Minister Boris Johnson may set in motion their return to London.

Mr Johnson previously said he was aiming at reopening schools across the country on March 8.

However, he said any easing of the lockdown will be dependent on the rate of infections.

During a visit to a vaccine manufacturing facility in northeastern England, Mr Johnson said: “We have still got infections running very high throughout the country — levels which last year we would have thought were really very high indeed — (and) still, sadly, a great many deaths in our hospitals.

Kate and Prince William may soon return to London with their children (Image: GETTY)

Parents will be given more clarity about the reopening of schools on February 22, when the Prime Minister is due to unveil his road map to lift lockdown measures, possibly including target dates “by which we hope we can do something at the earliest”, as he said.

If March 8 is confirmed as the date to reopen at primary schools, Prince George and Princess Charlotte will likely be asked to return to in-person teaching at Thomas’s Battersea in London.

This means the Duke and Duchess of Cambridge will have to travel south and settle back into Kensington Palace after weeks of absence.

Kate and William have been homeschooling their two eldest children throughout the lockdowns in place between 2020 and 2021.

The Duke and Duchess opened up on the challenges homeschooling presents in an interview with the BBC in April last year.

Kate said they had faced “ups and downs” like “lots of families”.

Becoming the teachers of their three children, she added, had been “challenging” but they had kept a strict routine.

Prince George to have ‘scrutiny of the world’ says expert

Prince William chimed in and, joking, added: “Homeschooling is fun”.

A few weeks later, Kate revealed Prince George was getting “upset” when comparing his and his sister’s homework.

Appearing on ITV’s This Morning, Kate said: “George gets very upset because he wants to do Charlotte’s projects. Because making things like spider sandwiches is far cooler than doing literacy work!”

Prince George is third in the line of succession to the throne (Image: EXPRESS)

In January, Kate took part in a remote show-and-tell exercise with parents of children attending Roe Green Junior School in Kingsbury, north-west London, during which she spoke about the toll the lockdown is taking on parents.

During the activity, led by headteacher Melissa Loosemore, the Duchess of Cambridge admitted she found pandemic parenting “exhausting”.

Explaining she is feeling pulled “in so many different direction” as she needs to cover various different roles for her children, Kate said: “I think as parents you’ve got the day-to-day elements of being a parent, but I suppose during lockdown we have had to take on additional roles that perhaps others in our communities, or in our lives, would have perhaps supported us and helped us with.”

Kate opened up about the challenges she has encountered during lockdown in January (Image: KENSINGTON ROYAL/TWITTER)

During the exercise, Kate and other parents were also asked to rate their maths skills – with the Duchess hilariously giving herself a minus five.

Prince George and Princess Charlotte are attending respectively Year 3 and Year 1 at the prestigious south London school – also attended by Maud Windsor, the granddaughter of Prince Michael of Kent.