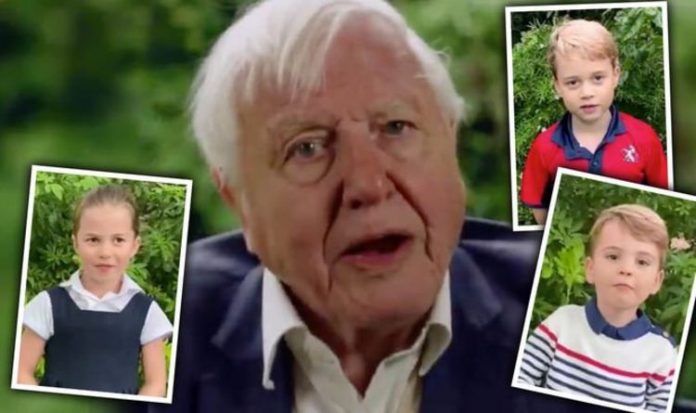 Prince George, seven, Princess Charlotte, five, and Prince Louis, two, feature in a powerful new video. The royal siblings put pressing questions about the environment to national treasure David Attenborough in a sweet new clip shared by Kensington Palace. Prince William and Kate, Duchess of Cambridge’s Twitter account shared the video on Saturday with the caption:  “Sir David Attenborough, we’ve got some questions for you.”

George kicks off the questions by saying:  Prince George said: “Hello, David Attenborough what animal do you think will become extinct next?”

David Attenborough replies: “Well let’s hope their won’t be any.

“Because there are lots of things we can do when animals are in danger of extinction.

“We can protect them.

“About 40 years ago I was with some mountain gorillas in the centre of Africa – mountain gorillas were then very very rare, there was only 250 of them left and we showed pictures of them on television around the world and people thought how terrible it would be if these became extinct.

“So they subscribed lots of money and lots of people came to help and now there are over a thousand of them.

“So you can save an animal if you want to and if you put your mind to it.”